YAWA - Your Diary for March 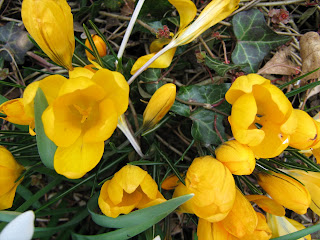 Whenever I think of March, it's in the colour yellow. February's gloom gives way to crocuses, daffodils and primroses in abundance: even the cheery self-sown Lesser Celandine in my gravel path's a welcome sight. I was worried my daffodils might be too late to show you for St David's day tomorrow, but they're just beginning to flower - much later than last year. By the end of this month, I expect most of you will be fed up of the sight of them as we UK bloggers proudly boast about our sunny blooms - Carol, you have been warned!

Daffodils are found in the wild here in England, so rather than telling you about the cultivated daffodil festivals and walks around various gardens, I thought it would be a treat to show you some of the places where they're still found. First stop has to be the Lake District, to the place which inspired Wordsworth's famous poem, no less. Next, we visit the Malvern Hills, close enough to visit Patient Gardener for a cup of tea as well perhaps? They're also found in abundance near here in Gloucestershire, where they're celebrated in various events during March. Finally, UK Safari has a summary of places I've left out of our whirlwind tour, so you can seek them out for yourself if you have the time.
Dates of note this month:
6-15th March - National Science Week (harrumph, that's more than a week - Ed.). EmmaT's already blogged about a rather fab event at Kew. Unfortunately I can't go as NAH's whisking me away for the weekend.
13th March - Comic Relief's Red Nose Day. The biennial event where the entire nation goes ever so slightly bonkers. I'll have more on this later.
14th March - National Ideas Day. I have no idea what this is about ;)
20th March - Spring equinox, so we have as much day as night today - hurrah the lighter times have arrived! More information about equinoxes and solstices can be found here.
22nd March - Mothering Sunday and World Water Day. Here's the post I wrote about the latter event last year.
28th March - Earth Hour - vote for planet earth with your light switch.
29th March - The clocks go forward as British Summer Time begins. Am I the only one who's out of sorts for ages after this happens, in spite of the lighter evenings?
Have a great month everyone - if you've anything to add to March's diary, do let us know here at You Ask, We Answer ;)
Events time out YAWA