The Buzz at Heddington Steam Rally 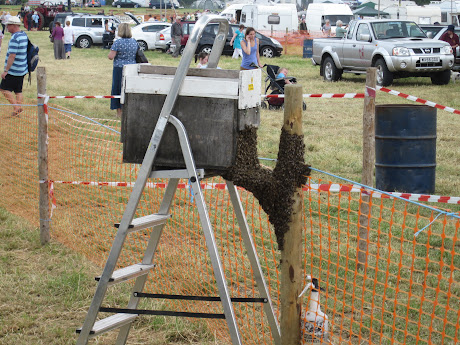 There was an unscheduled event at Saturday's Heddington and Stockley Steam Rally when these bees decided to swarm and land on a fence post next to the stationary (soon to be even more stationary than usual!) engine exhibit. Soon the entire showground was a-buzz with what was going on as regular updates were given out by the main showring's commentators.
Obligingly the bees had also settled close to the first aid point so any problems with stings could be sorted out quickly. This didn't seem to be a problem though - as you can see I could get up quite close to take this photograph without being troubled by them.
A local beekeeper was exhibiting at the show and was instantly dispatched to deal with the swarm. I spoke to him about it later and he told me he could have dealt with them within about 15 minutes. However, this would have entailed knocking the post to get them into his box and probably quite a few angry bees flying about as a result.
In view of the show's crowds, instead he just left the box on top of the post so that the bees could quietly go about getting themselves into their temporary home. I saw the swarm at about 2pm and the beekeeper said they'd all be safely tucked up in there by the evening. The bees swarm in order to find a new home when the colony gets too large, so they think the box is an empty nest for them.
As the rally is also a country show, quite a few people thought the swarm had been arranged as part of the events. The beekeeper smiled when I told him this. It would be great if I could do that, he said. It'd show lots of people that bee swarms aren't something to be feared.
Well, no-one was fearing them on Saturday - they were fascinated :)
Events time out Wildlife Wiltshire