Getting Ready for GMT* 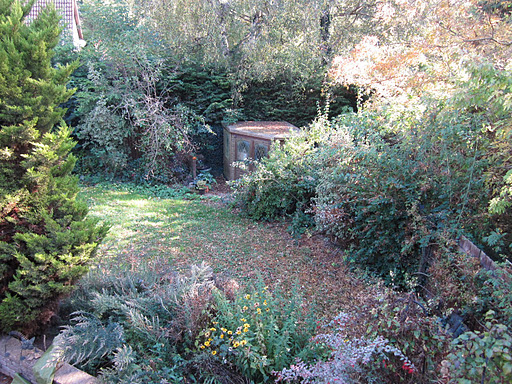 Tonight the clocks go back, so we get an extra hour to play with - hurrah! It's also meant I've been getting ready for GMT* in my garden this week by taking advantage of the remaining light and relatively sunny weather. OK, we'll draw a veil over Thursday's miserable day ;)

As you can see, there's plenty to be done. The fallen leaves have been gathered up and used for mulching the garden. The shredder's been pressed into service to make further mulch from various prunings. Although the fat lady hasn't quite sung yet, this year's thick dahlia duvet is firmly in place.

I've had some further clearing up to do on the lower patio as last weekend's high winds brought down lots of branches from the overhanging silver birch. It wasn't anything too severe, it's just their super long thinness means they're always ripe for a little weather pruning. These got added to the mulch pile too :)

Also, the ivy from the neighbouring public land made a full scale onslaught over the garden fence this summer and started scaling my garden shed. Whilst I like the ivy for its wildlife nurturing properties, this was simply a step too far. It's now had a severe haircut and lobbed back over the fence - I daren't add it to the shredder as I've been caught out by its survival abilities before. I'm sure the neighbourhood trees will enjoy a little random mulching too.

The shed's had some further TLC: I've cleaned the windows and had a little clear out, so I can gather up all my solar lights and various bits of garden whimsy today and store them in there over the winter. There won't be any appreciable illumination from the lights during the next few months and I don't want to lose any of my garden ornaments to the frost, so in the shed they'll go. The last day of BST* is always my signal to complete this task as it seems rather fitting somehow.

What autumnal tasks have you been up to lately?

NB: The BBC are promoting the Go On, Give an Hour campaign this weekend, which is all about using our extra hour to help someone get online. I signed up earlier this week and I'll be helping a friend to get her blog started tomorrow. I'm rather chuffed Andy Garland from BBC Radio Kent got in touch earlier this week about a garden blog feature he's doing to promote this campaign on his Sunday gardening show.

As well as the dulcet tones of Dawn, James and possibly Nigel, listeners will hear me reading my Dusky Rose post from this month's Garden Bloggers' Blooms Day. I had to dream up a rather wacky way of recording my piece as I don't have a smart phone and I couldn't find our PC's microphone**. So I sent Andy a recording made via my camera, accompanied by a rather wobbly and boring picture. Fingers crossed it's done the trick!

Update: Here we all are on BBC iplayer until around 11am next Sunday. It's about 2 hours and 18 minutes in.

Disclosure: This post is sponsored by Tiger Sheds. Note I'd planned writing it anyway to remind us re the clocks going back tonight.
Garden