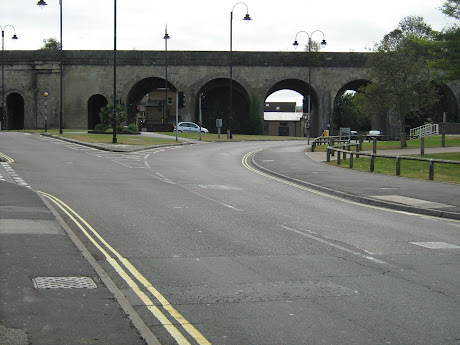 With this stonking great Viaduct dominating its centre, there's no escaping that one of Chippenham's various identities is that of a railway town. Built by Brunel (the subject of the letter I in this series) in 1841, it's one of the architectural wonders of his Great Western Railway. The structure also sports a blue plaque similar to the one I showed you in the above link.


It's a listed building and as it forms the gateway to Chippenham, it was decided to illuminate it at night as the town's nod towards celebrating the Millennium. Seeing our local bypass is no longer lit from midnight until the early hours, I suspect the viaduct's lighting has been included in this cutback too.

Whilst it might be an architectural wonder, I believe it's too dominant of much of our town's central space. I've often wondered if some of the ideas at Kilver Court could be used to soften its edges. Of course this would need to be tempered with the requirement not to create some hidey holes for evil doers, but closer inspection reveals the non-road area under the arches is being used as a car park come barrel storage place for the local shops and pub.

It would be good if these were screened in some way as they're an eyesore. Perhaps some more trees and shrubs on the grassed areas shown in the picture plus on the other side of the viaduct would help to do this? I believe this could be achieved without compromising the lines of sight needed for the traffic and pedestrians.

This is the view towards town taken not far from the cinema. The following link shows you another view from New Road (the road leading off the left of this picture) when I wrote about Chippenham's web cam.

This is for ABC Wednesday (albeit a day late) and forms the 22nd of my themed posts about Chippenham. Sorry Mark, V wasn't about your blog after all, though it is a worthy contender ;)
ABC Wednesday Chippenham Public Planting