Showing posts from September, 2014
Show All

Powis Castle: At a Gallop 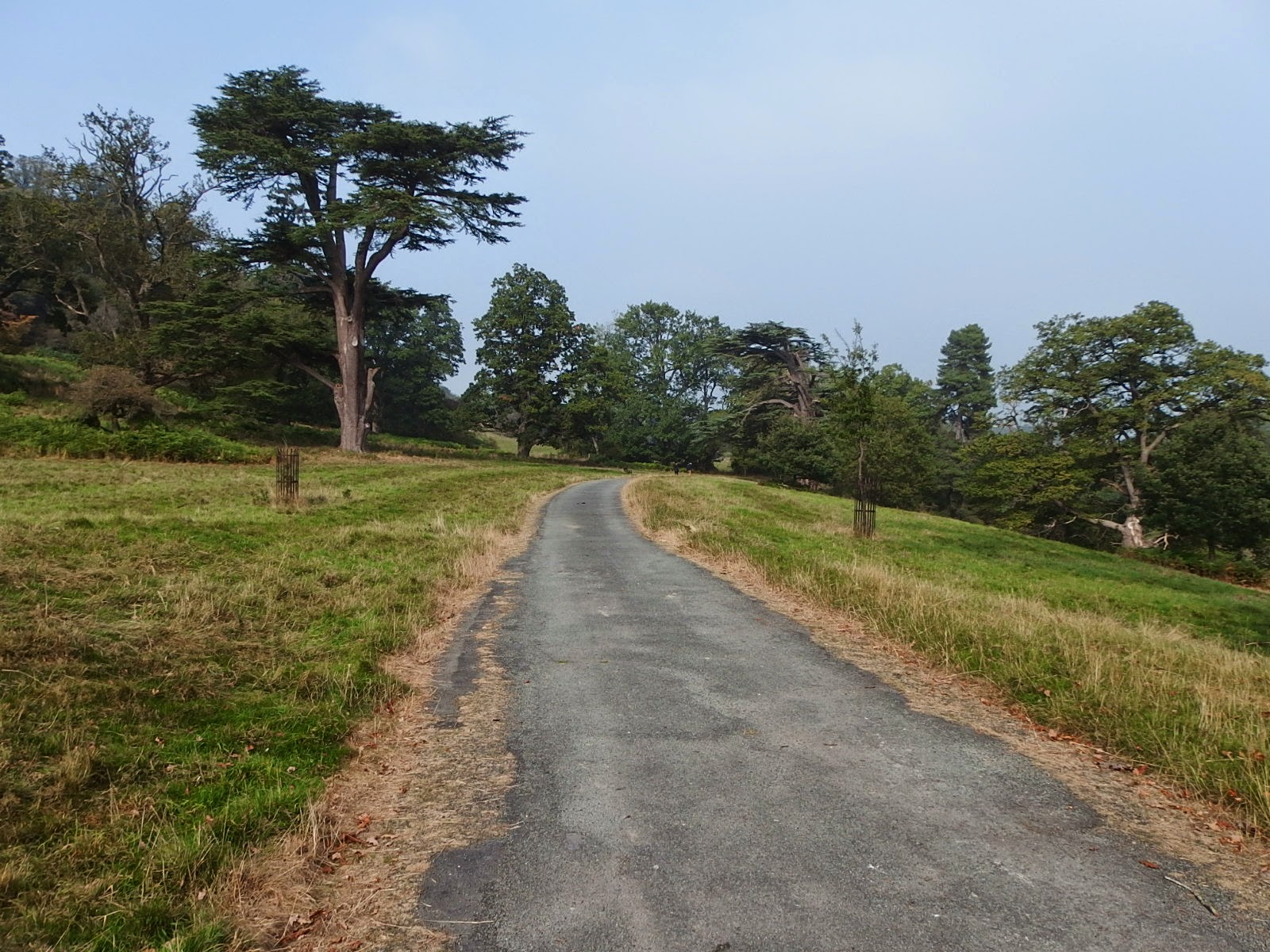 This is a writing experiment involving a story within a story. You can either read the pictures and their captions, or the plain text in between. You comments on whether this works for you are much appreciated - I wanted you to share in my garden visit and read about how it happened...


We always have a fair share in deciding what to do on holiday. There are common interests to explore - such as looking at industrial heritage and drinking real ale - plus the selection of our own choices to visit together. I like NAH's noisy steam and he enjoys the peaceful contrast of a garden visit.

So our recent holiday in Shropshire saw us taking a return tootle up the line at the Welshpool and Llanfair Light Railway for him, plus a visit to Stockton Bury Gardens* for me.


NAH was so keen to get going on the Welshpool and Llanfair visit he completely overlooked our day was in danger of ending just after lunch. That was until I pointed out the tickets were day rover ones. I could tell NAH was keen…
12 comments
Read more 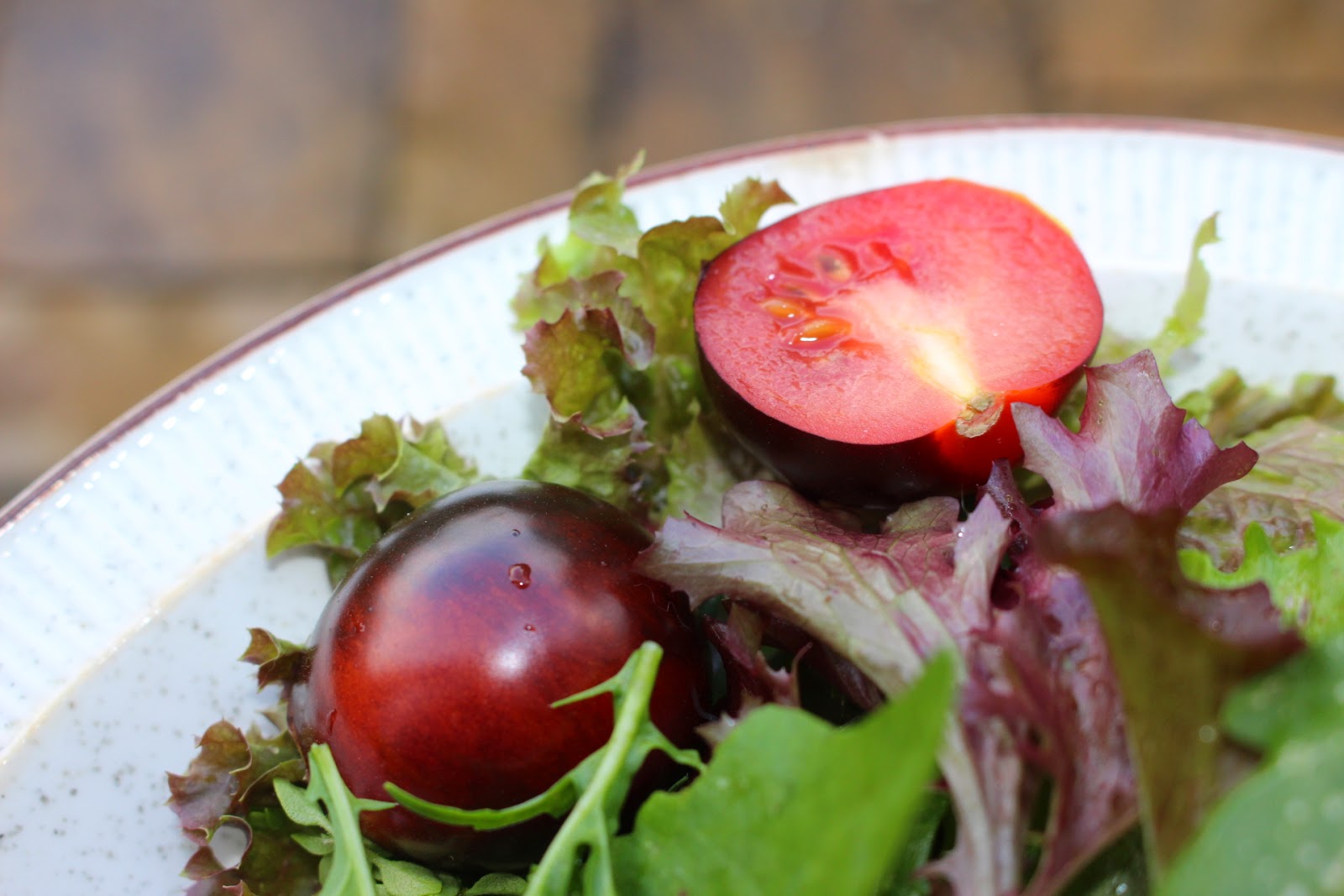 In the early days of The 52 Week Salad Challenge, I asked the question What is a salad? I didn't have the definitive answer back then and I've since realised there isn't really one. The key question to ponder is What makes a great salad for me?

One of the reasons I started the Challenge 3 years ago was to prove to NAH salads needn't be boring and I believe I've done that many times over. I've found it takes just four simple steps to ensure we have a great tasting salad every time. All ingredients are raw, unless stated otherwise.


Step 1 - Make a large base layer of seasonal greens

Wordless Wednesday: The View at Powerscourt 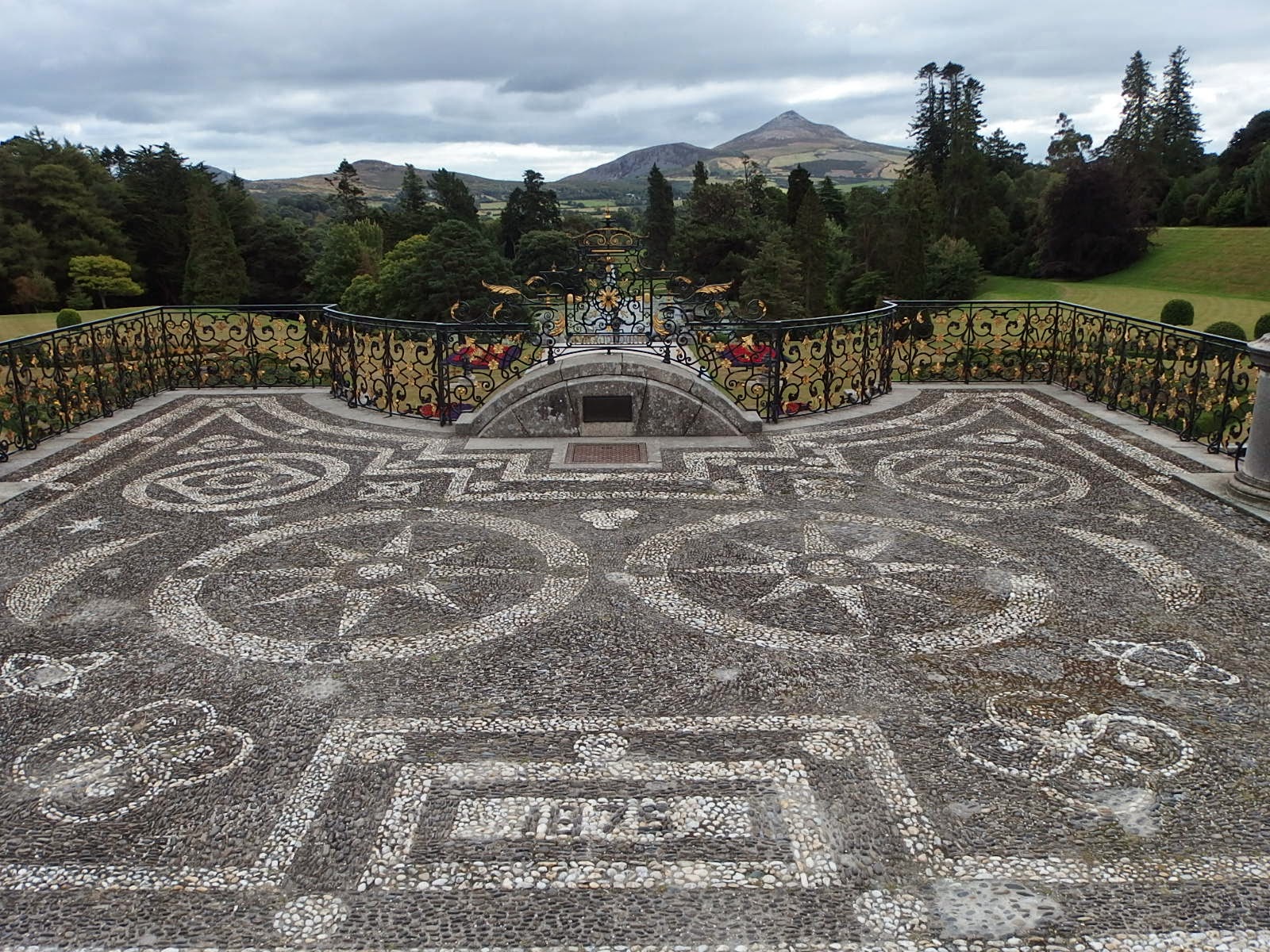 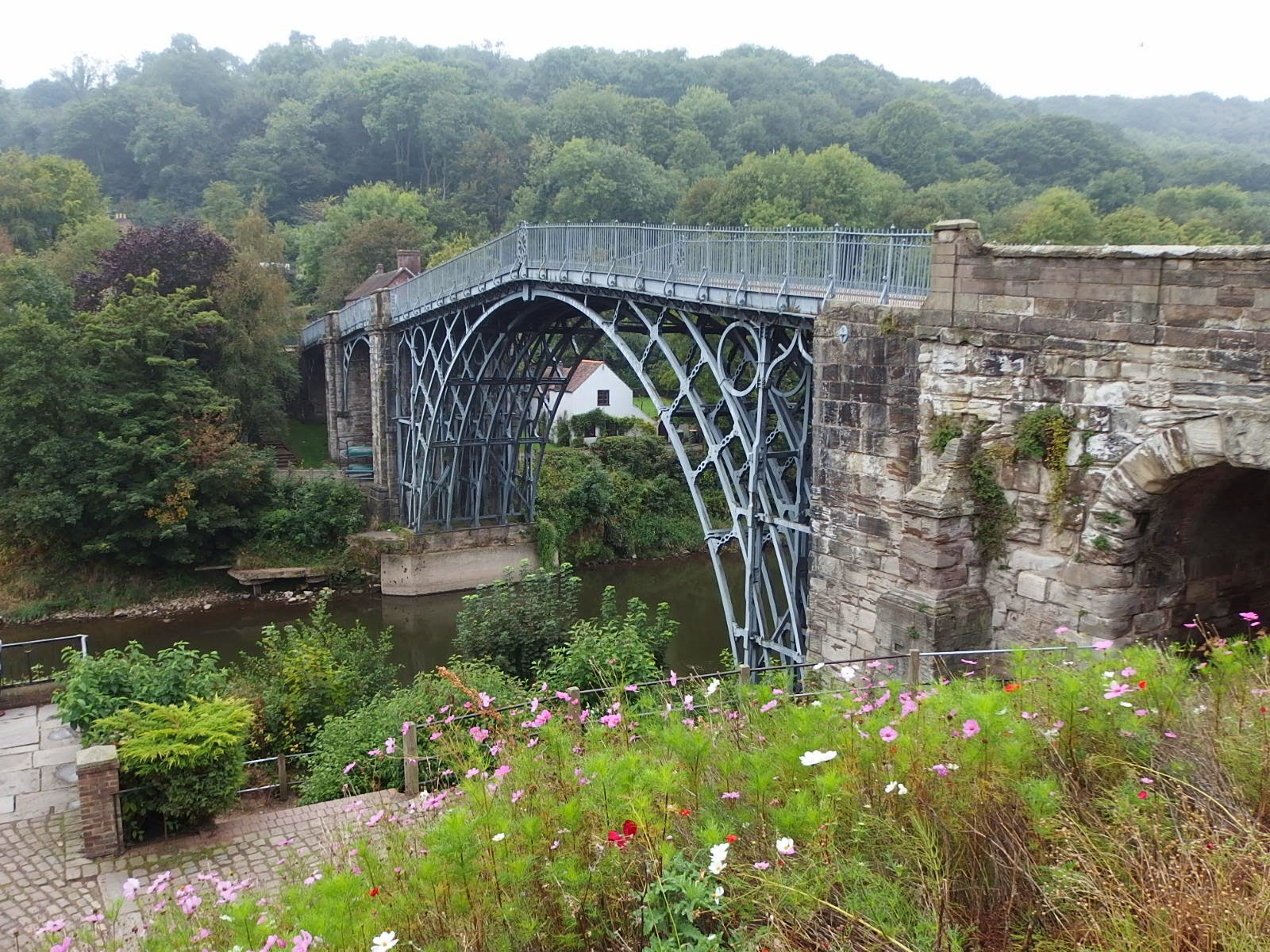 We've just got back from a quiet week away in Shropshire, a place where time seems to have stood still for a while. This wasn't always the case as the county hosted landmark events during the Industrial Revolution. Here's a view of the world's first iron bridge as evidence.

Our whole week was steeped in heritage. It started with visits to the excellent Heritage Open Day activities in Bishop's Castle (where we were staying) and Ellesmere Wharf. We also learned how the Victorians farmed at Acton Scott and contrasted it with the town life of that time at Blist's Hill, part of the Ironbridge museum complex.

Our explorations also extended into the natural world. We visited Long Mynd, a long hill which is one of the oldest places in Britain as it is comprised of Pre-Cambrian rock i.e. rock with a minimum age of 541 million years. You can't get any more ancient than that. 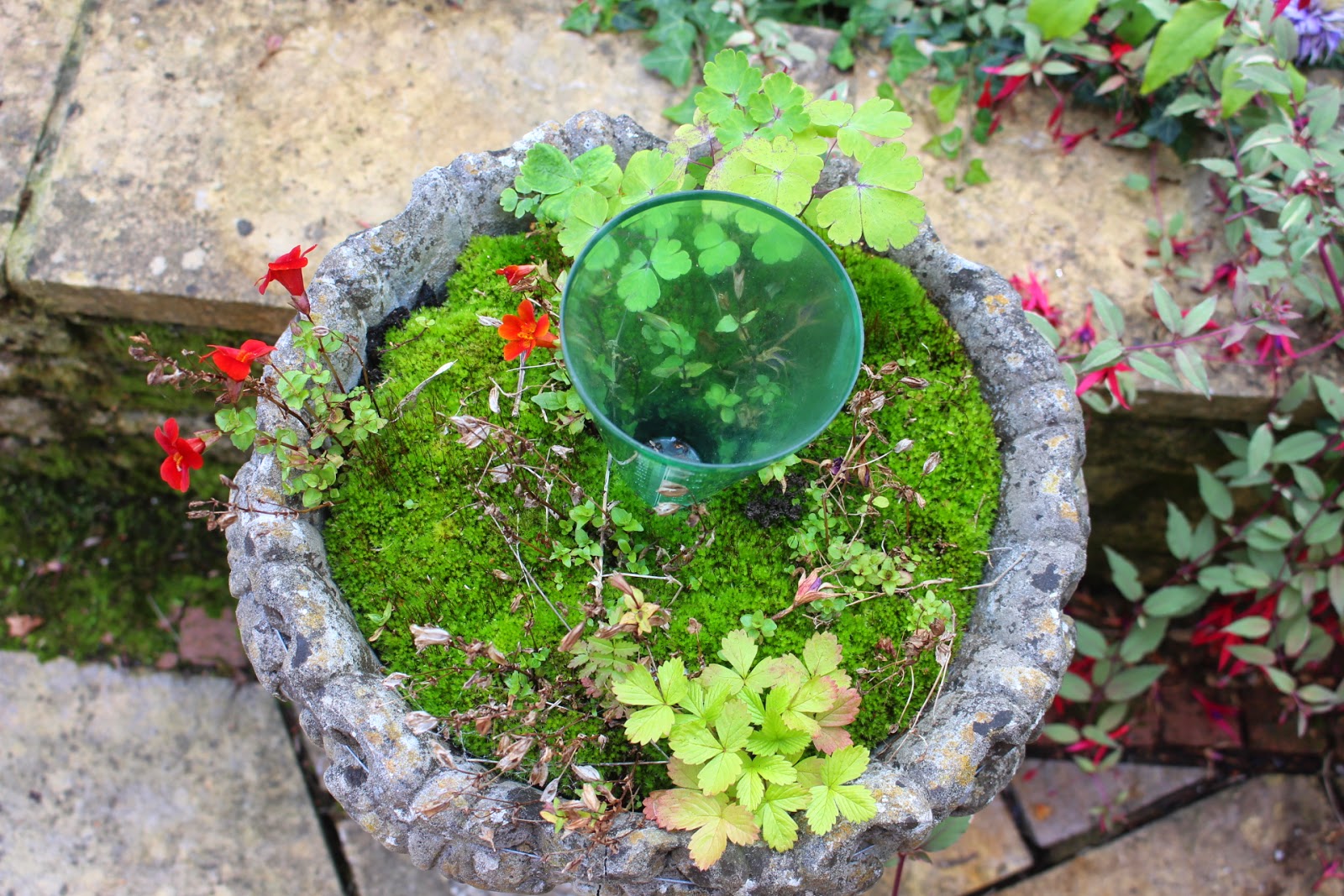 Sometimes gardens happen by accident, just as it did with my old birdbath. The result is a miniature garden which reminds me of those dishes seen in the children's section at local garden shows.


Here you can see my miniature garden in its context. For many years it was a successful birdbath, which I bought for a song at a local auction. Then one winter it got badly cracked and a subsequent repair with some polyfilla worked for a couple of years. Then another severe frost meant the bowl cracked again and snapped into two pieces. It's now held together by some wire just below the rim.

For a while I used it as an extra pot for seasonal bedding; violas or pansies in the main, then one summer I tried some mimulus for a change. They've self-sown themselves every year since, adding the splashes of red and orange you can see in the top picture.


Further neglect and poor drainage meant a moss garden was born. Just the effect I strived for elsewhere in the garden, but failed to achi…
9 comments
Read more

Wild About My Garden 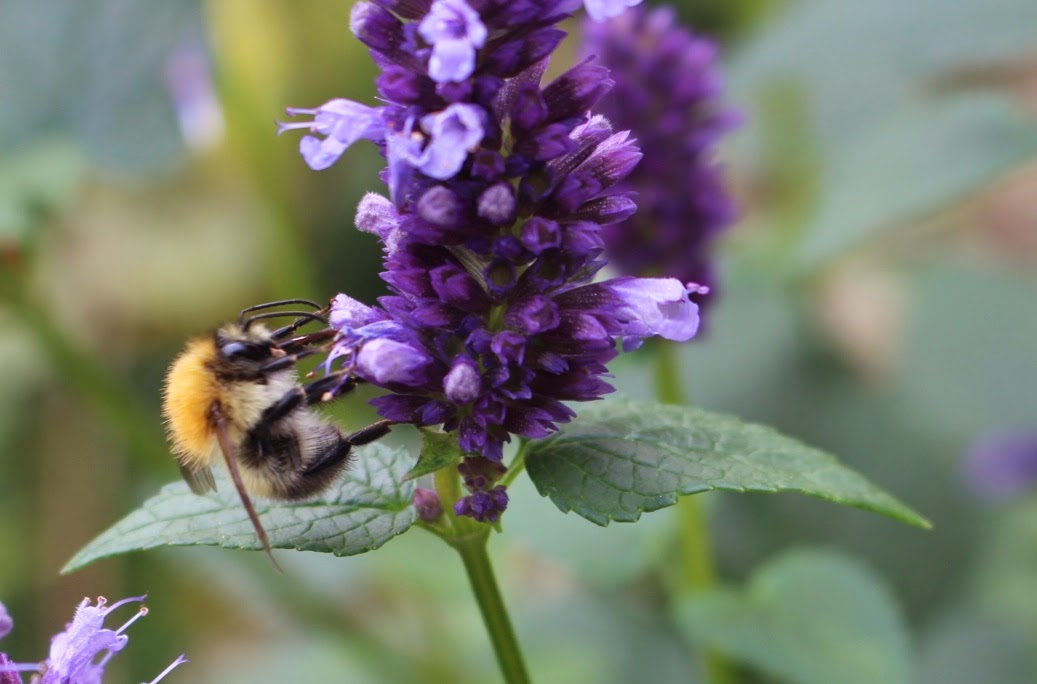 It's Wild About Gardens Week, so I thought I'd show you some of the latest wildlife photographs from VP Gardens. This year's theme is gardening for pollinators, so I've started with a common carder bee on Agastache 'Blackadder'. This has been in flower since May and is my number one bee plant this year.


I've enjoyed watching the lavender go 'sproing' when the bees land on it over the past few weeks. It's still warm enough to eat lunch and drink coffee on the patio so this has been great entertainment as the pot is right next to the bench where I sit.


Of course the mass descent of small tortoiseshells into my garden happened after the Big Butterfly Count finished last month. The red admiral butterfly always makes a late appearance here and I've yet to capture one with my camera...


I had a bit of a surprise whilst tidying up my tomatoes recently. I heard a kerploosh in the water tray below and thought I'd dropped one in there. About a min…
19 comments
Read more 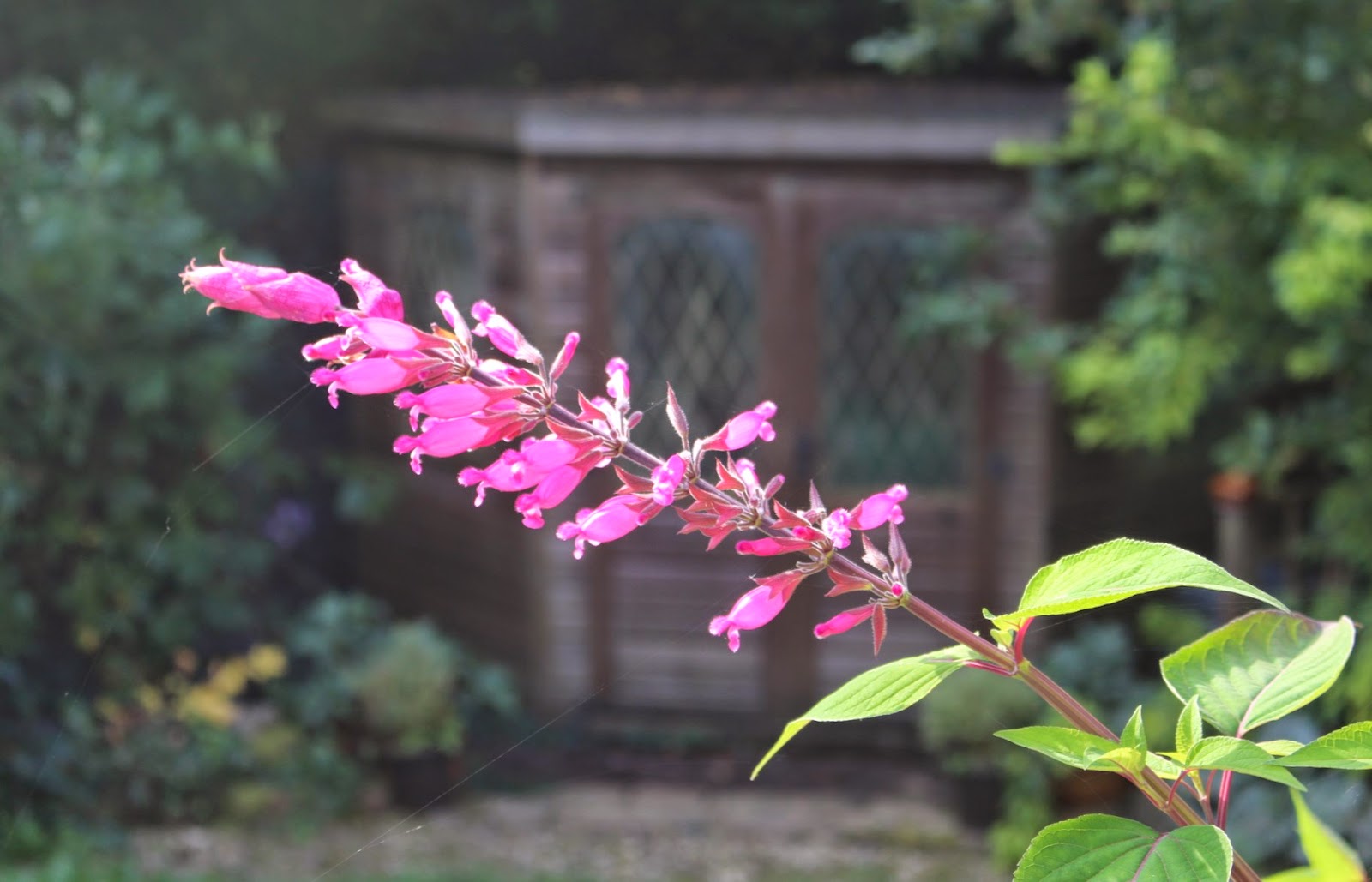 Salvia involucrata'Hadspen' is a new plant at VP Gardens. Karen gave it to me last year after we'd admired it on a trip to Bodnant when I went to stay with her. I rather like this early morning shot as you can see the autumnal orb spiders are starting to capture it for their webby schemes.

I've planted it in the top terrace bed, where it nods to my Salvia 'Amistad' across the way. Both are tall specimens (S. 'Amistad' is as tall as me this year) so they need plenty of space. S. 'Hadspen' has decided to splay out a little and its flowers make me giggle. They're such a girly pink - not like me at all - and they make me think of a row of bright lipsticks lined up along the stem.


Here's a closer shot of some of the flowers along one of the plant's bracts- see what I mean? And what about those ticklesome little 'brushes'? I need to find out more about the unusual staminal lever mechanism adaptation* salvias have for their pollinat…
7 comments
Read more

Got a Great Gardening Idea? The Future Fund Wants to Hear From YOU!

September 12, 2014
It's not often I get to tick a garden off my 'Must See' list AND hear a great story, but my visit to Le Manoir aux Quat' Saisons yesterday turned out to be a red letter day.

... it's an ordinary day at your magazine's office, then the postman brings you a sober looking solicitor's letter. What could it be? If you're like me, you'd immediately assume the worst.

But stop and consider the complete opposite instead. You rip the letter open and learn someone has not only read your magazine for years, they've loved it so much they've left the magazine a sum of money in their will.

Well, what would you do?

That's exactly the delicious dilemma The English Garden faced recently and the result was yesterday's launch of the Future Fund. It comprises a bursary of £5,000 for 5 recipients (one per year) and is open for anyone to apply to fund their bright idea.

There are no limits on what's included, except the applicant …
2 comments
Read more 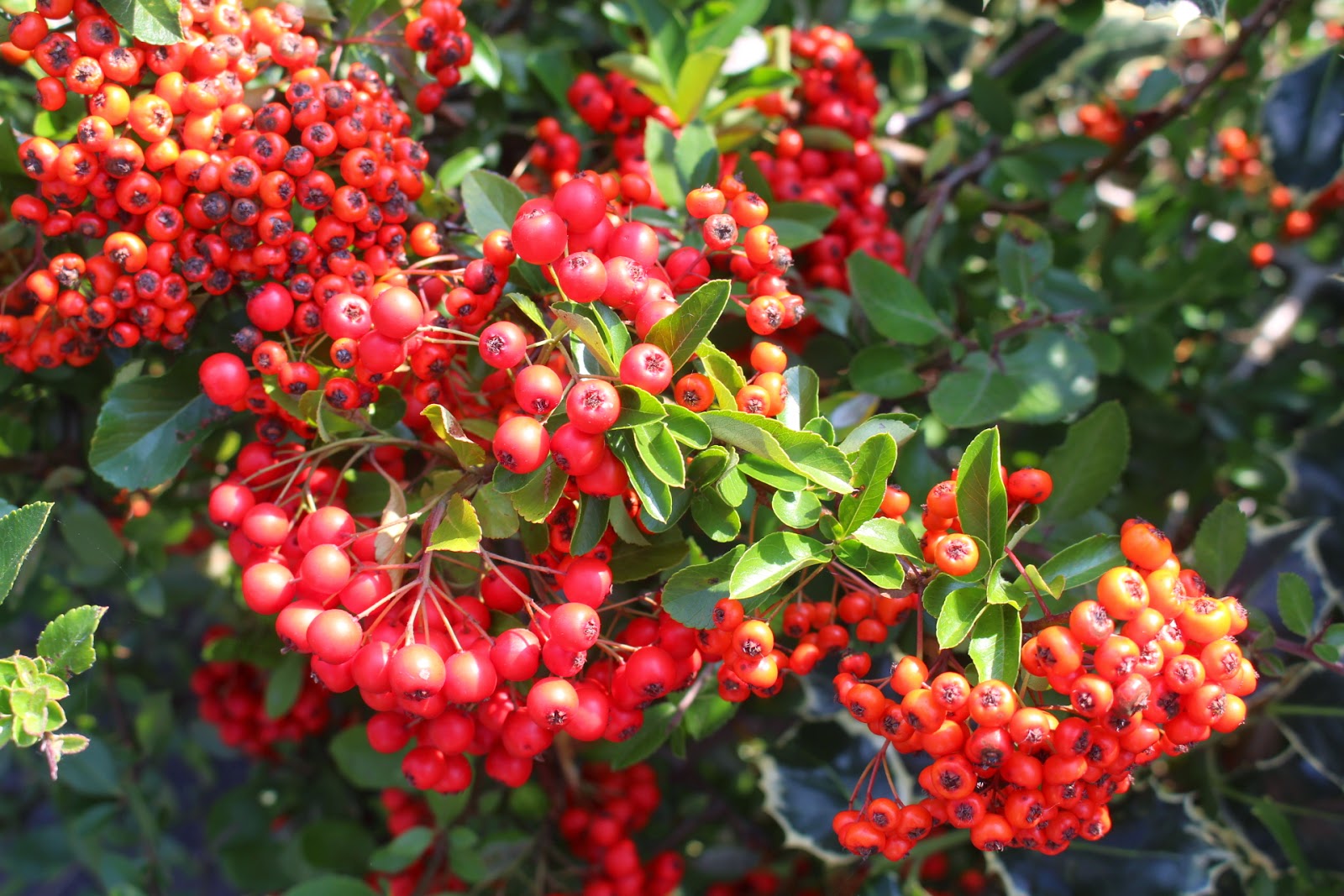 Until recently I haven't felt the need to grow Pyracantha (aka firethorn) at VP Gardens. It's in abundance on our estate where it forms plenty of the hedge planting, just like it did for us at our previous house. It has plenty of plus points; it's an evergreen shrub, relatively quick to grow and has short, sharp thorns which makes it an effective security barrier.

It also has double season of interest, bearing creamy white flowers in the spring and bright berries from now until they're devoured by the birds. As you can it's a good year for berries. Within a few minutes walk of our house there are both red and orange bearing varieties on show, which echo those found on the rowan trees nearby.

Last week whilst writing September's Tree Following post I reluctantly decided the 'Rambling Rector' rose is to go. It seemed perfect for protecting the long fence along our garden's boundary and stopping curious children from climbing over. However, it's r…
4 comments
Read more 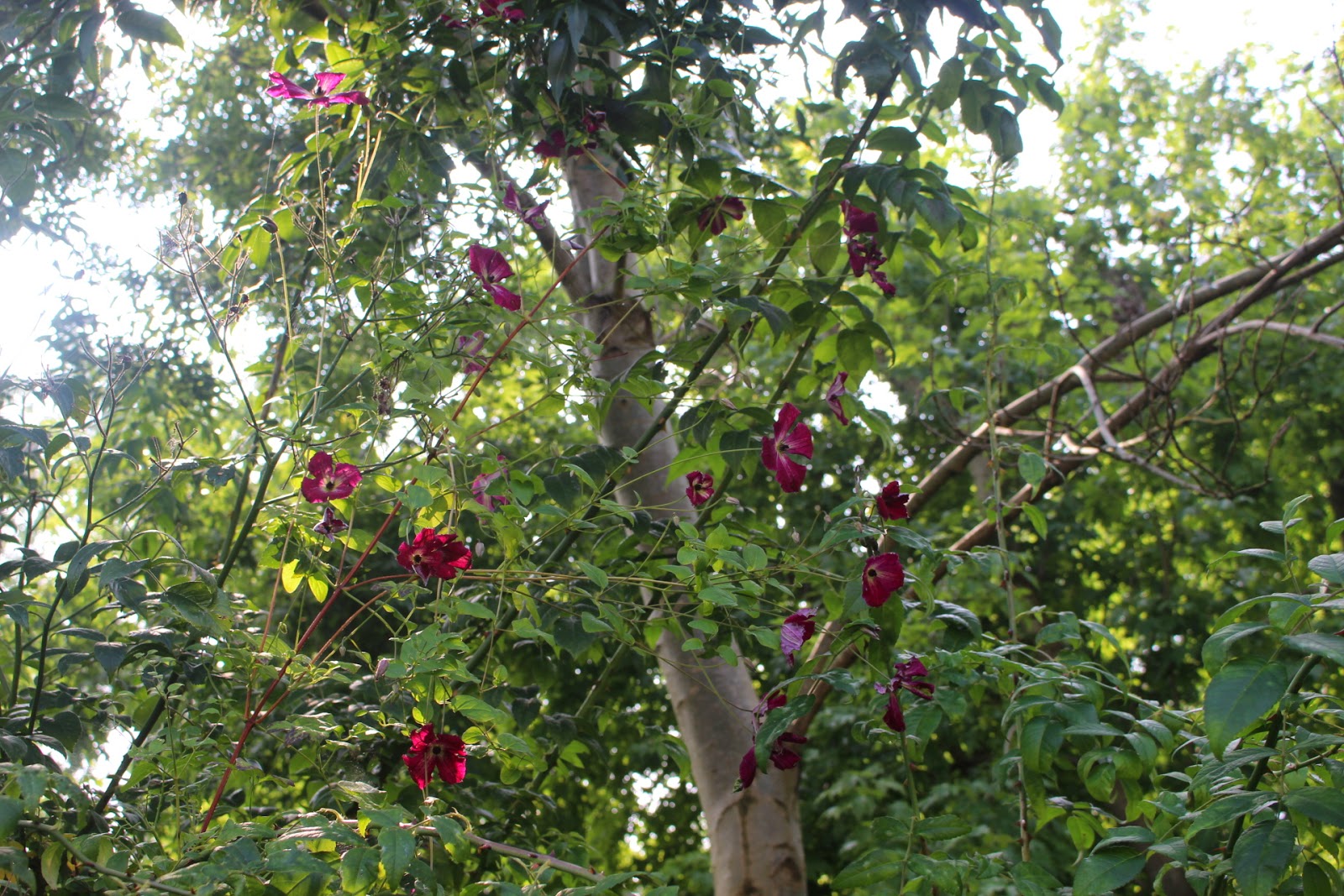 This month my ash tree forms the backdrop to the plant activity happening below it. As in other years, the plants growing against the garden fence have stretched themselves upwards to meet the lower branches of the tree. These are the ones NAH is so sure he wants to get rid of.

The thin, diagonal 'branches' you can see in the foreground are from my Rosa 'Rambling Rector'. This rose certainly lives up to its name and makes regular bids for freedom beyond my garden. I often have to untangle it from the ash tree at this time of the year.

The main plant you can see is Clematis 'Kermesina', a more delicate looking clematis of the viticella type. Don't be fooled, those stems are quite wiry and just like the rose it strives upwards in its bid to bend other, more sturdy plants to its will. This clematis always surprises me as it's usually hidden amongst the rose, then it pops out into the open in the autumn. I love its rich red blooms, especially when the dapp…
14 comments
Read more 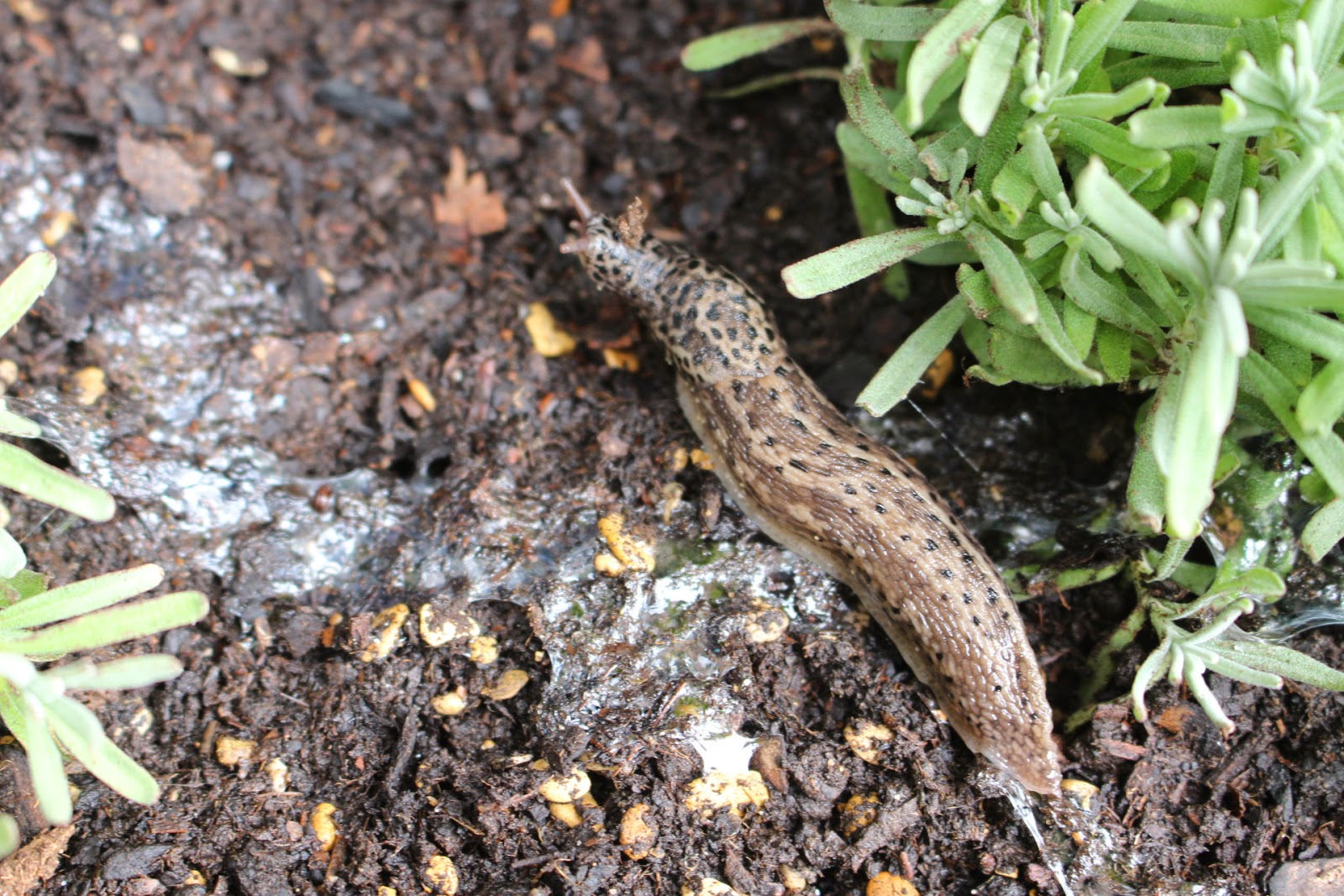 I found this very distinctive slug noodling around one of my garden pots recently. It's a leopard slug and my niece and nephew could see immediately how it got its name.

Unlike most slugs, these are a surprise garden friend. They eat fungi, rotting plants and other slugs, so they help keep the garden tidy and free from their pesky cousins. That's a huge thumbs up from me.

They're thought to be widespread in the UK, but actual records are scarce. Therefore OPAL (the Open Air Laboratory) is looking to find out more about its distribution via its Species Quest initiative.

You can help by sending in your sightings of this, plus any devil's coach horse, green shieldbug, small tortoiseshell butterfly, tree bumble bee or two-spot ladybirds which cross your path.
14 comments
Read more

I Love September For... 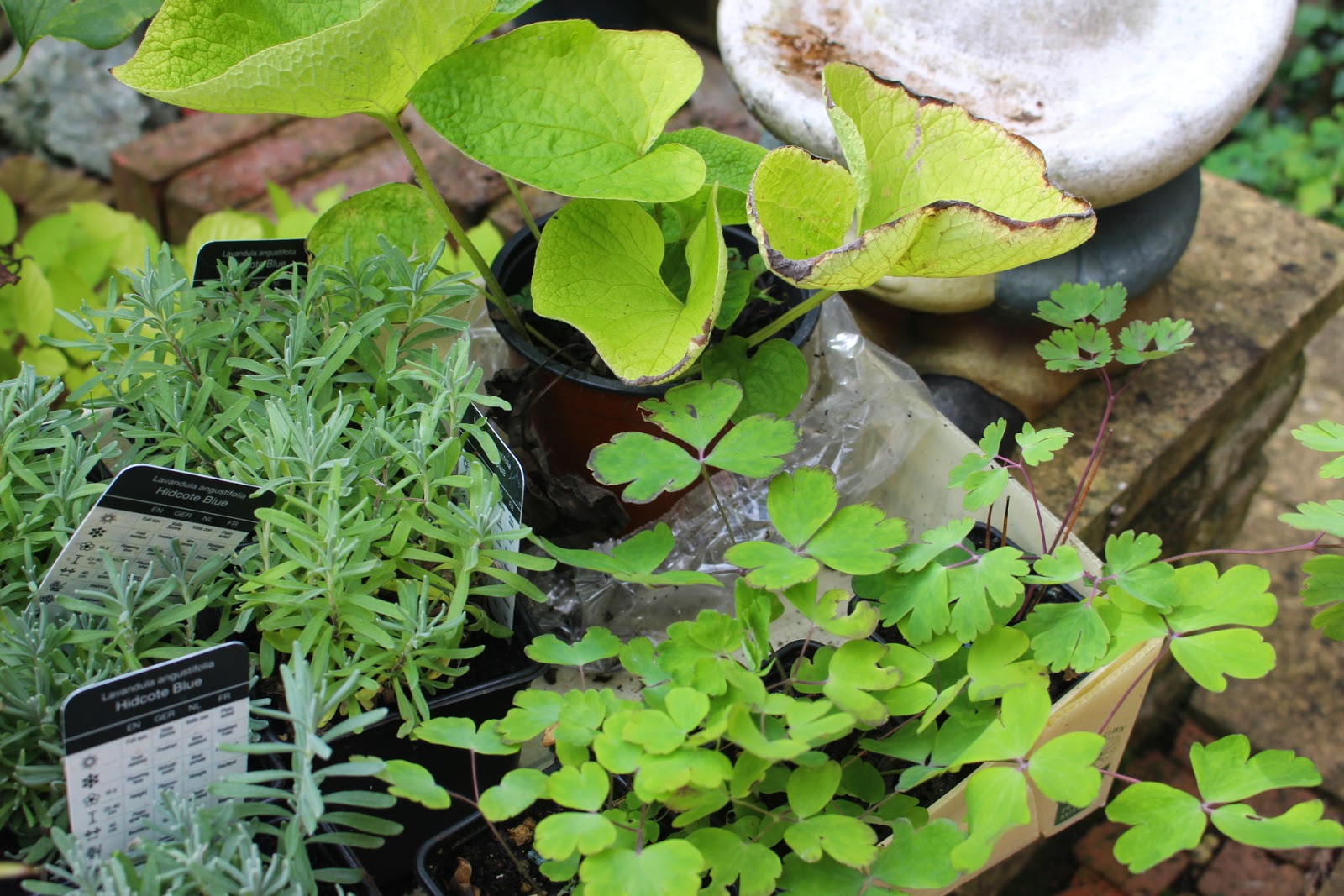 The garden has developed a definite autumnish air about it in the past week or so and last week's plentiful rain means the soil has opened up again ready to nurture new plants. As you can see I've been nursing quite a few on one of the garden walls over the summer in readiness for this moment.

The lavender are earmarked to replace some woody looking specimens in one of my garden pots on the patio. They're still in flower and the bees are visiting regularly, so I haven't quite got the heart to replace them yet. The brunnera is earmarked for the front side garden, as are the self-sown aquilegia plants I rescued from the back garden's gravel path last week.

September is usually a fabulous time for planting because there's plenty of residual warmth in the soil - even in a clay one like mine - plus plenty of moisture which lets the plants get settled in nicely before winter hits the garden. I've found my autumn plantings tend to do better tha…
10 comments
Read more

GBMD: Flowers, Cold From the Dew 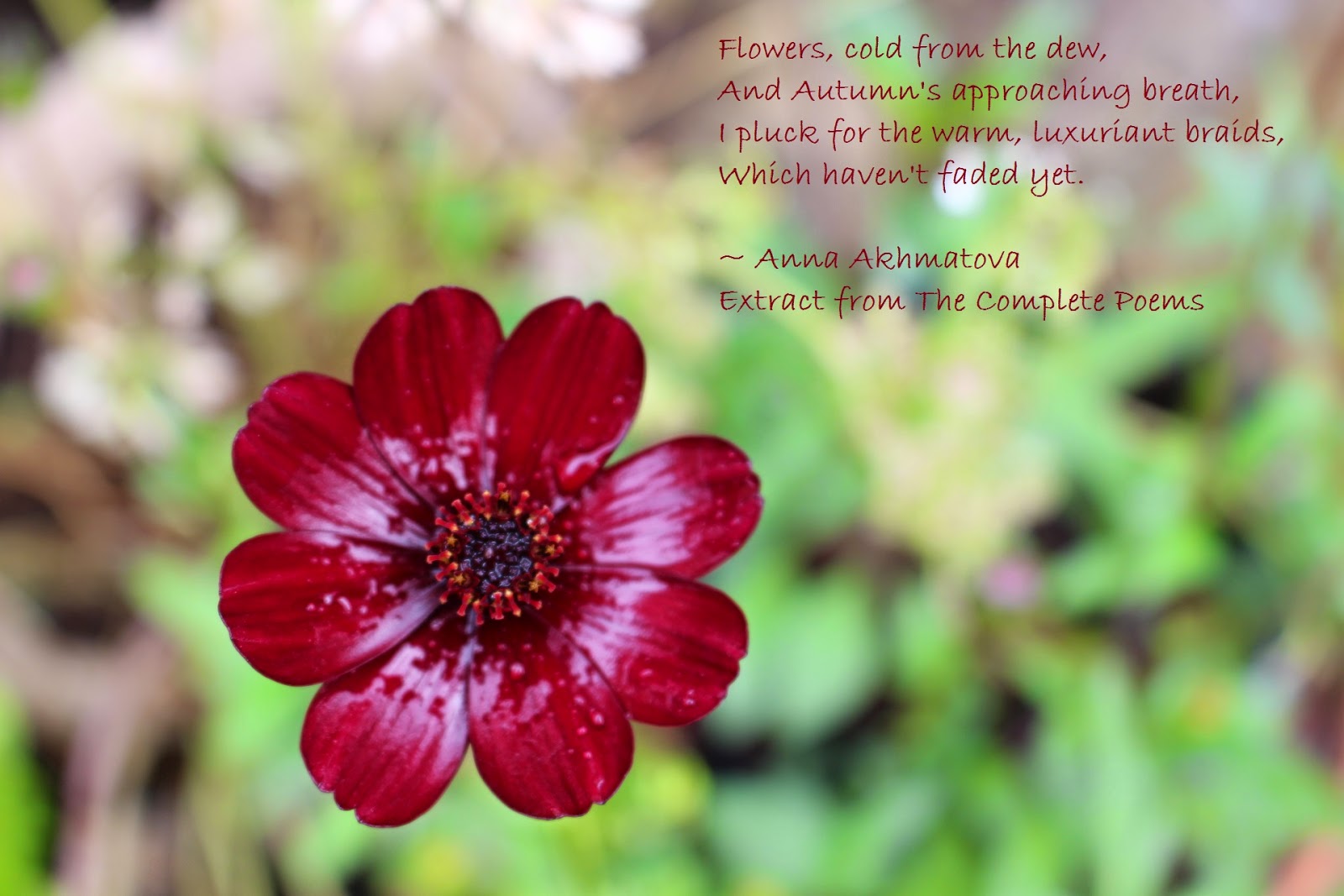