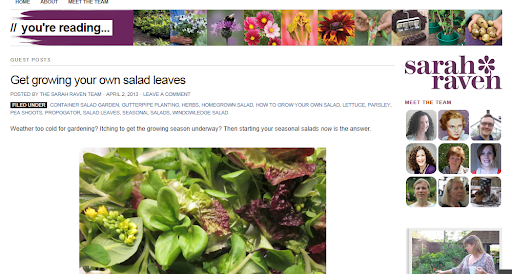 I don't reserve all of my best content for Veg Plotting, some of it's found in my guest posts elsewhere. It's great to have the challenge to write something suitable that's different to my usual style.


A full list of links to my guest posts are listed below. If you’d like me to write one for you or to commission an article, drop me an email at vegplotting at gmail dot com with an outline of what you have in mind.

Note: I don't publish guest posts on Veg Plotting, unless we've got to know each other well through chatting away via our blogs, or other social media. 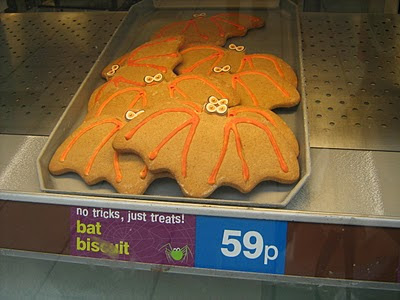 
See my Author Page for the full set of posts I've written for Gabriel Ash.


See my Author page on the Reader's Digest site for all the articles I've written for them.


The Sea of Immeasurable Gravy


Review of Parks, Plants and People by Lynden B Miller - 1st March 2010
Review of The Well-connected Gardener by Sue Minter - 27th December 2010

The ones that got away - no longer available online

A few days ago I was feeling rather peckish and knew this would be the worst possible time to walk to the shops and buy something for lunch; there's far too much temptation in there! My usual lunchtime options weren't available at home, so I started to think about other possibilities instead. Thankfully my store cupboard came up with the answer: frozen peas, onions, stock cubes and herbs, so it didn't take long to come up with a tasty pea soup. It took just 20 minutes to plate up the perfect antidote to a dull winter's day. Ingredients 1 litre vegetable stock (a stock cube dissolved in hot water is fine) 1 medium onion, sliced thinly 750g frozen peas (I used a bag of petit pois) Freshly ground black pepper to taste 4 heaped teaspoons dried mint (or fresh when in season) A swirl of cream, low fat creme fraiche, or natural yoghurt per bowl (optional) Method Pour the vegetable stock into a large pan and add the onion and peas Add the black pepper to ta
Read more

I love pub quizzes with friends. They're fun and sociable, with the added frisson of a possible prize if we're on top form. Sometimes one of the rounds is a Connections puzzle, where the answers have something in common. Often getting the connection early on can help with some of the more tricky questions... or lead us completely up the wrong tree if we get it wrong! One of our quizzes came up with a Connections round which I thought was worth tweaking and twisting a little for Veg Plotting . I hope you enjoy it. What you need to do Answer the questions below, and take the letter as indicated from your answer to complete the blank boxes. For multiple word answers, take the letter from a particular word as indicated, otherwise it's taken the first. The answers to the questions and the completed line of boxes all have something in common. What is the newly formed word and the Connection? Question Answer Title of a novel b
Read more

Fun times with friends (thanks for the photo, Clare) and a festive Slovenia made for a very special time when we visited recently. As you can see Bled was both festive and green, and being a garden blogger it's natural that I should celebrate both with this post about my travels there. Let's see what I found... We loved the Christmas lights in Ljubljana, with each street having its own theme. One had musical notes to accompany the classical music being played there; another had planets, comets and galaxies which made the crowd go 'Oooh!' when they were switched on in the early evening. The pictured street was more intriguing, with it's double DNA helix, a sperm, a nucleus, and a female egg. Too bad we found out just a few hours before we were to leave that there's a guided walk around the lights , which reveals the artist Zmago Modic's intentions. I'm speculating that as a Catholic country, this represents the immaculate conception. There
Read more

Today is National Poetry Day and this year's theme is 'Truth'. I've chosen Rudyard Kipling's poem at the end of the Elephant's Child because its guidance helped me through most of my career. When I worked in IT I'd often write What, Where, When, How, Why and Who at the top of my notebook when I went off to meetings, especially at the start of a project. I was even given a nickname -  Mrs Why  - by my colleagues! Before then I must have had them in my subconscious as a scientist, and I've since realised these simple words are at the heart of my blogging too. Now they're worth bearing in mind when reading and watching anything on the internet 😉 I took the photo at the top of this post earlier in the year; staring out of our bedroom window to the birch tree at the bottom of our garden is where you'll often find me pondering... or day dreaming. There's a display of poetry in Chippenham's shop windows today. I'll take a stro
Read more

Like the film of the same name, there had to be a sequel to the Halloween garden I found in 2013 . Today's example takes the display a little further with the introduction of a "Chamber of Horrors" aka the "Brexit Nightmare" garden. It injects some fun into these less humorous times and like the garden's creators I'm posting this photo as such, not as a political statement. They've placed buckets on their railings in order to raise funds for an inspirational local charity, Jamie's Farm . Last year they raised £1,500. Unlike my previous Halloween garden, which just focused on some of the more traditional imagery, this is an example which won't stand the test of time. I have an inkling the display was created before this week's vote on having a general election. Otherwise their "Chamber of Horrors" may have been called "The Nightmare Before Christmas" instead. 😉😜😊
Read more