When Penpals Get Seedy 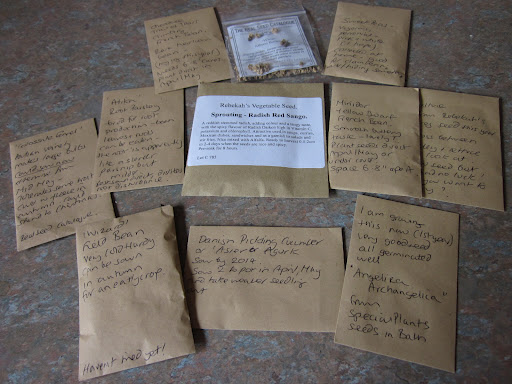 I may have received a number of items in brown envelopes at the weekend, but happily they're not of the dodgy kind, though they are distinctly seedy :) 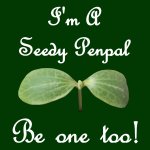 It's all down to Carl and Mel who've organised the fab Seedy Penpals scheme.

I've played 'pass the parcel' before over at Allotments4All, but this is a more personal  and cheaper way of exchanging seeds as there's no ginormous parcel to pass on to the next person in line.

Effectively I have 2 penpals: one who sends me seeds and the other I send seeds to. We have a discussion first about gardening experience and style, plus any preferences or dislikes, so the seed sender can pick out the spare packets in their stash which fit the bill. My selection is winging its way to Amsterdam - a place firmly in the affections of both NAH and I as we honeymooned there.

Seeds will be exchanged twice a year (in February 2013 next time) and we'll be blogging at the end of each month about how we're getting on with the seeds we've received.

My seeds arrived on Saturday from Joanna over at Zeb Bakes. They're a mix of herbs, veg and flowers; some which are familiar and others are completely new, like the Danish pickling cucumber and root parsley. I was also pleased to find some seeds from Special Plants as I was over at Derry's with Victoria last week :)

Most of the seeds will have to wait until next year, though I've sown the bulb fennel straight away. As my garden is south facing, I can get away with it and it'll be great to add an anise flavour to our salads in the coming months - from thinnings, frondy foliage and bulbs.

I'm amazed at how starting The 52 Week Salad Challenge has taken me in some unexpected directions this year. Discovering new blogs both near and far (including Carl, Mel and Joanna's); connecting with food bloggers who've come up with some wonderful salad combinations; and learning how to bake sourdough bread have all been a surprise and a delight.

Above all, it's the community and sharing - embodied in unselfish acts like Seedy Penpals - which have been most uplifting.

Thanks for my seeds Joanna - I hope I can do your gift justice :)
52 Week Salad Challenge Blogging Fruit n Veg NAH plants