Salad Days: There Are More Questions... 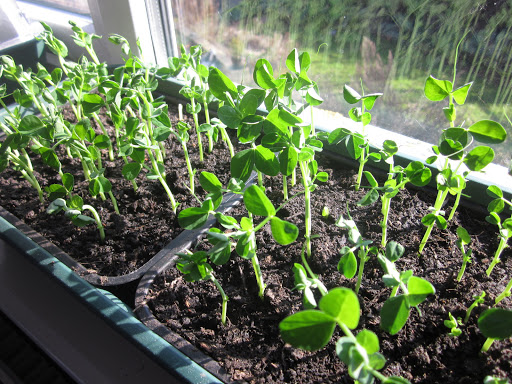 With most experiments I've ever conducted (either in a professional capacity or my own amateurish potterings), the results often garner more questions than answers*. You may recall I concluded in last month's Salad Days there may be a slight advantage if winter indoor pea shoot growing is started off in a propagator.

However this answer inspired the following additional questions:
So this month I've been trying to find answers to questions 2-4 (entirely) and number 1 (in part) and I've put questions 5 and 6 away for later. I've been  measuring the growth of the original peas and also started 3 new identical pea trays (same types of tray, growing media and the same seed variety and numbers used): 2 for upstairs (1 in a heated propagator, the other in the unheated propagator used last month) and 1 for downstairs (in an unheated propagator placed in the equivalent position on the windowsill). The above picture shows the upstairs peas happily growing away post emergence and after they'd reached the height of their respective propagator lids earlier this week.

Results of the growth observations (Question 2)

Although both trays had their lids removed from the first measurement onwards, the increased growth observed with the peas started in the tray with the propagator lid on continued for the rest of the growing period. Whether the increased yield at the time of picking is significant needs further investigation and is probably minimal for my scale of growing. NB some of these shoots were used to make the yummy Sprouted Lentil and Pea Shoot Salad :)

Results of the heated vs unheated propagator and upstairs vs downstairs emergence rates (Questions 3 and 4, plus a little bit of 1) 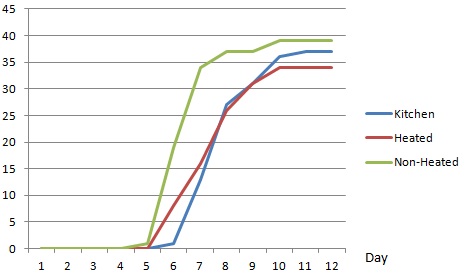 The pea emergence start day and overall curve for the non-heated propagator is similar to that seen last month, so it looks like the results are repeatable for propagator use at least.

It's been an interesting few weeks conducting these experiments. It looks like I can save some of my electricity bill by not using heat for my indoor growing**. I like that I managed to pick my pea shoots a week earlier than last year, though whether I've significantly increased the actual crop obtained each time is questionable (though on a commercial scale there should be an advantage, they will be using giant propagators i.e. greenhouses and polytunnels ** after all...).

However for both the upstairs vs downstairs comparison and cropping times, there are too many variables not eliminated from these experiments. This year's earlier pickings could be due to e.g. better light levels this year; the poorer performance downstairs seen so far might not be due to lower light levels as I first pondered, but to lower temperatures (heat does rise after all), or both.

What is certain though at the end of this post, is I still have more questions than answers!

* = A bonus point to everyone who remembers this was a song by Johnny Nash ;)
** = so I've started off my chillis instead
*** = I don't have either of these, hence my windowsill growing and propagator ponderings

One further question: how's your salad progressing this month? Tell all in the comments, or add the link to your blog post in Mr Linky below...
52 Week Salad Challenge Salad Days Testing