A winter day, the summer grass turned hay
Frost in the field 'til the dawn of May
A summer's light never shone as great or as bright
So dance in the shadows of a winter's night

We've been learning a wonderful new carol at choir and it's great to have one which is about the turning of the year at the time of the winter solstice. I took the above photo to match the words. 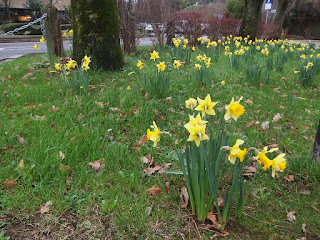 However, the scene I found at Crewkerne, Somerset on Saturday was quite unexpected - and it looked wrong when I matched the words to it. What a topsy turvy December we're having. Coincidentally,  Halsway Manor is also found in Somerset and is the only residential folk centre in the UK.

If you thought the solstice was the 21st (which I did), this year it's today at 4.49am instead. Apparently the date can vary between 20th and 23rd December, though the 21st is the most common day. This link tells you a lot more.

* = the link takes you to the composer playing the tune on his hurdy gurdy, the instrument for which this carol was composed in 2011. Click on Show More and the lyrics will be revealed.
Bits n Bobs choir Out on the Streets Public Planting