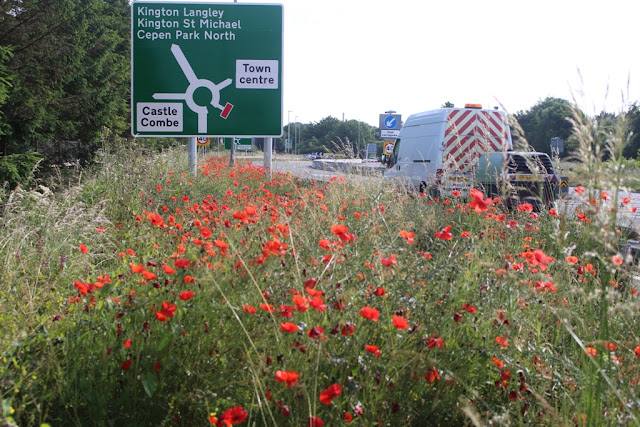 A little bit of plant magic has happened here in Chippenham, with the appearance of thousands of roadside poppies alongside the A350 by our estate. Part of this road was converted into a dual carriageway recently, and it's this area where the poppies are to be found. I almost lightly guerrilla gardened this stretch, as there was a lot of bare ground left after the work was completed. Now I'm glad I stayed my hand and let nature take its course instead.

Poppy seeds remain viable for decades and they need bare soil in which to germinate. This is so they're not out competed by the grasses and other plants which make up our usual roadside sward. It's also why the poppy is such a potent symbol of remembrance - the soil churned up by WW1's activities gave rise to the blood red poppies seen in profusion on Flanders fields.

I pondered whether these particular poppies were sown deliberately by the road contractors as part of the site's restoration, but it appears that the Department of Transport's approved mix consists solely of a few grass species plus white clover. There are some wildflower mixes available for the more ecologically minded, but these tend not to contain poppies. This is no surprise to me, as I'm sure any farmers whose fields border the restored land would take a dim view of such a deliberately sown - in their view - weed.

I also wondered whether they might be part of the recent 100-year WW1 commemorations, where there was a huge campaign to sow poppies across the country. I think this is unlikely as the campaign was timed for 2014, and I've not seen evidence of it continuing beyond that year.

Whatever way gave rise to these poppies, I'm glad they're here. I'm sure they're from the natural seed population found in the soil and I'll continue to enjoy them while they last. 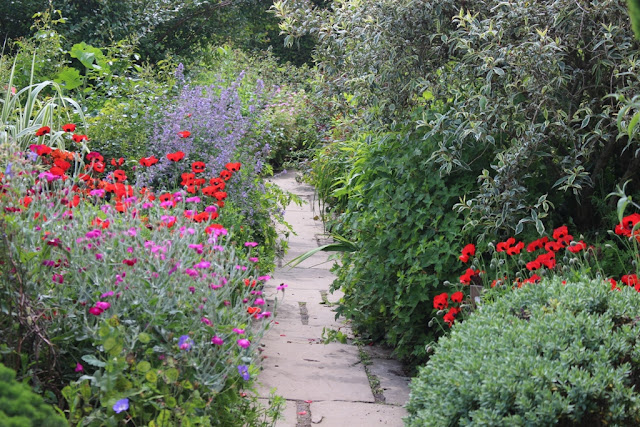 I found some further poppy appeal at Great Dixter earlier this week. Pictures of Dixter's ladybird poppies are burned in my memory from Christopher Lloyd's articles and books, and it was marvellous to see them for real on Monday. I really must get around to having some of these here at VP Gardens. Everyone was struck by this Turkish aka tulip poppy, Papaver glaucum at Great Dixter on Monday. Fergus Garrett told us these flower over several months and do well in various soils as long as it's well drained. I loved the form of this flower, which I likened to a cup and saucer on the day.

This is another poppy destined for my garden... they're great if you love poppies like I do, but don't have the space for several kinds to extend their fleeting season. Fergus said they got theirs from Chiltern Seeds, if you also like the look of them.


My thanks to Nick Mann of Habitat Aid who was most helpful with information on roadside verge wildflower mixes. His mixes are based on the Emorsgate general purpose meadow mix linked to above, but he will also tweak them according to the local conditions and flora of the area where they are to be used. Good stuff.
Against the Odds Chippenham Garden Visit Out on the Streets Weeds