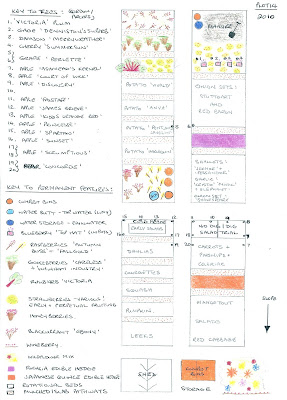 Replotting the plot for 2011, not 2010 as the picture suggests! Click to enlarge if needed

So here's the plan for 2011: a new bed for wildflowers (previously the nettle bed underneath which lurked dozens of bags of soot) and the previous fire area (in reality a massive pile of weeds and grass clippings) will house this year's crop of autumn onions, shallots and all my saved garlic.
The right handside used to have the same layout as the left, but instead this year it will have larger plots and two edible hedges: one using the Fuchsia 'Genii' cuttings I took last autumn and the other some Japanese Quince including the bargain C. 'Crimson and Gold' I found last year.

Other projects include planting a wineberry plus a couple of bushes each of honeyberry and blackcurrant. The installation of the edible hedges plus the wineberry and honeyberry are due to the inspirational 'A Taste of the Unexpected' and herald the redoubling of my efforts to do something for my ongoing Incredible Edibles project.

The apples need to have stronger cordon training wires installed and all the new strawberry plants need setting out. I'll also be replacing some of the mulch paths with slabs as soon as I get hold of some freebie or cheap ones.

There's a No dig vs Dig experiment to conduct and a new biological pest control to trial. Oh and Kai Lan to grow - I seem to have left that off the plan. Thank goodness all the non-perennial crops are marked in pencil! I'm also hoping a space for my planned cutting garden will also make itself known - it might have to snuggle up with the Dahlias.

So there's quite a lot to be getting on with as well as growing all the usual stuff.