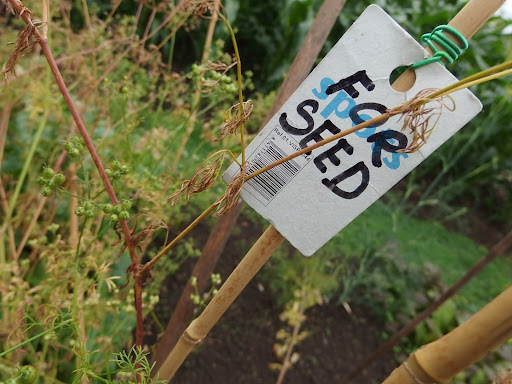 I sneaked over and took this picture on my neighbour's allotment earlier this week as it's a timely reminder to start saving my own. Coriander is notorious for running to seed quickly (though 'Confetti' is meant to stay in leaf longer than most varieties) and whilst I can always do with more leaves, I also welcome and value its seed. Home saving is so easy to do with this plant (just leave it to dry) and when it's ground up it adds a wonderfully warming, citrussy quality to winter soups.

I've also been pondering whether my lettuces could be saved for seed as they're so keen to bolt this year. My 'Black Seeded Simpson' and 'Marveille de Quatre Saisons' look to be good bets as they're described as 'old' varieties and 'Relic' is sold as an heirloom variety. This suggests their seed lines are stable and they're not F1 varieties - key as the latter won't come true from seed. 'Dazzle', 'Little Gem' and 'Salad Bowl' should also be OK because I've found an online reference describing them as Open Pollinated varieties*. That's probably enough to be going on with for a bit of fun and seed saving experimentation.

Looking at my trusty Back Garden Seed Saving book, I see lettuces are fairly easy, apart from needing to take a bit more care when cleaning them ready for storage. They usually self-pollinate, but as my plants are very close together, I'm going to put a bag over each seed head just in case. I'll leave cross-pollination and experiments with developing my own varieties for another year :)

I've successfully saved tomato seed before, as well as fennel, chillis and various beans (shallots and garlic bulbs too), but this is my first foray into leafy salads. I'm interested in hearing about your experiences with saving salad seeds, especially from other leaf varieties such as spinach, mustards, or pak choi to name but three. Which are easy to save? Any varieties which work particularly well? Do you have any seed saving tips to pass on to other Salad Challengers? 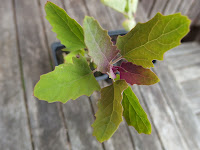 I've just remembered Naomi's written about Tree Spinach this week: how great it is for salads and how it self-seeds sooooo easily - as do rocket, winter radishes and all kinds of mustards now I come to think about it. I can certainly vouch for tree spinach's tendencies as the plant Karen gave me last year self-seeded itself into 2 pots nearby which were meant to be overwintering Echinacea. At around a foot high, I must have the smallest specimens of 'tree' spinach in the world ;)

* = I've explained more about Open Pollinated and F1 varieties here if you're interested.

NB If you'd like a sneak preview freebie packet of lettuce seed, then you can get hold of Thompson & Morgan's brand new variety Intred here. 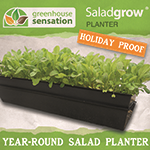 Note to readers: sponsorship goes towards my blogging costs and does not affect my independence.