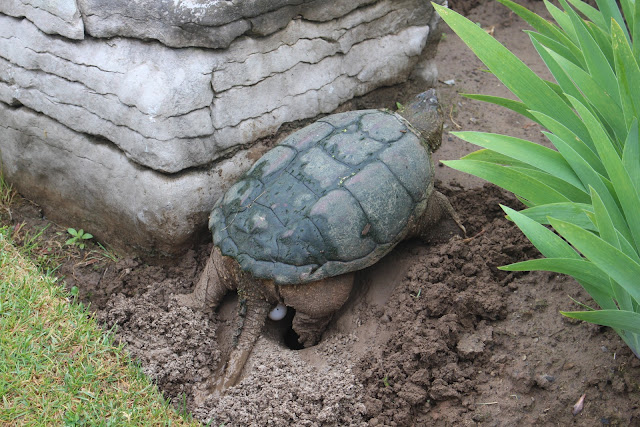 Pity the poor gardener who kindly guided us around the wonderful iris collection in the Laking Garden at The Royal Botanical Gardens (RBG) near Toronto. The star attraction at the time was a turtle laying her eggs in the garden's soft fertile earth, so he didn't stand a chance while a gaggle of garden bloggers tried to catch the moment when another egg plopped into the hole.

Apparently this is a regular occurrence in June, which merits a warning on the garden's page on the RBG website. Luckily the turtle was unfazed with her new found stardom and quietly carried on with her business.


Our quest for egg laying pictures sated, it was time to explore the collection of hundreds of irises on display, showcasing cultivars from this and the last century. As you can see, our timing was just right as there was a colourful tapestry of blooms on offer. Most of these are laid out in chronological order, so it's easy to see how breeding has affected the size of blooms, plant height and the variety of colours available.

Many of the blooms are North American bred - I spotted lots of labels originating from Canada and Oregon, so here was a rich supplement to the magnificent displays I enjoyed at this year's Chelsea Flower Show.


The Laking Garden is home to the RBG's perennial collection, which also majors in peonies, grasses and clematis as well as iris. In the above photo you can see the perennial borders and some of my Fling friends rushing to take photos.

I also spotted the start of this year's vegetable patch, which focuses on the heirloom varieties grown in Ontario during the 1800s and early 1900s. It also harks back to the garden's origins as a market garden.

Sadly it was too early in the season to see the patch in full fig and I didn't have time to explore the varieties being grown, or to compare them with those we know and love in the UK. There's an excuse for another visit at a later time of the year ;)
Garden Bloggers Fling Garden Visit time out Unusual Places Wildlife