A Slice of (Big) Apple Pie 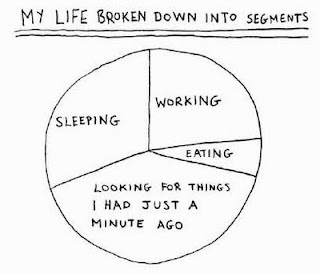 I'm indebted to Daryl for sending me this image from her marvellous blog about life in New York, which in turn she got from a friend. I often return to it, even after 18 months or so as it still makes me giggle and ponder a little. That bottom section's painfully true - I managed to lose an entire packet of autumn onion sets up at the allotment the other day within minutes of putting them down 'somewhere' *. I also wonder what to replace Working with - Blogging in the winter and Gardening in the summer perhaps?
If you were to sum up your life in a pie chart, what would it look like?
I'm off to Oxford tomorrow for the Food Growing Bloggers get together (yippee and hopefully another slice of Cat's delicious marmalade topped apple pie will be available just like last year), followed by a workshop on potatoes on Sunday. Have a great weekend everyone and see you on Monday :)
Oh, and UK bloggers don't forget: there's the possibility of an extra hour's lie-in on Sunday as the clocks go back in the wee small hours. What's the betting seeing NAH's away that I'll forget, rush around like a lunatic and arrive in Oxford way before the workshop starts?
* = I did find them and they're planted now - they were on the little plot next to the one I was going to put them in. I 'hid' them by a pile of weeds, but I had to go back to the car and retrace all my steps on the plot before I found them again. No wonder I'm terrified dementia's a mere brain cell away ;)
Bits n Bobs Blogging