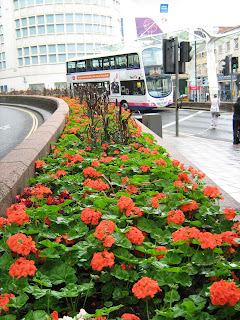 My local garden centre and the city of Bath may have chosen pink geraniums as their seasonal planting, but in Bristol it's bright orange instead. I snapped these on the outskirts of Broadmead last Thursday, but also saw examples around College Green and in the Centre. BTW the camber of the streets is a bit strange where I took this photo, which is why the new Primark store in the background looks like it's falling over, yet the traffic lights and people are nicely upright.

I like this planting. It's bold and just the thing on a rainy day, which is when I saw it. The more I look at seasonal bedding, the more I believe the mass plantings of one or two varieties only are the ones which work best for me. I even like the grass that's used (!) because it adds some needed height to this very large border and because its darkness contrasts so well with the brightness of the Geraniums. However, I've forgotten which one it is, even though it was particularly trendy last year - can anyone ID it for me?

I had a reunion with some of my ex-colleagues at lunchtime - which was great - so I also took the opportunity to have a quick run round Bristol beforehand. Some outdoor space design best practice and Banksy will follow shortly :)

In the meantime, I hope you're having a good weekend.

Update 21/9/2009: At last I have an ID for the grass as I found a labelled plant at Kilver Court yesterday: it's Pennisetum glaucum 'Purple Majesty'. It seems to have been the plant of choice for adding height to summer borders in public planting schemes this year.
Design Public Planting time out