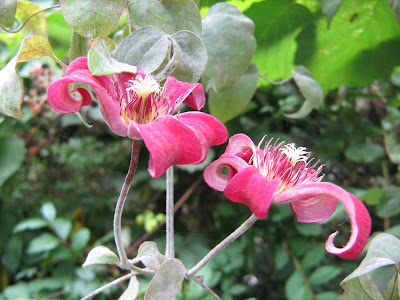 Concealed were all thy beauties rare
'Neath the dark umbrageous shade,
But still to gain the loftiest spray,
Thy weak stem its efforts made;
Now, every obstacle o'ercome,
Thou smilest from thy leafy home.

It might look a little poorly, but I was so pleased to discover these flowers of my Clematis 'Gravetye Beauty' last week. I thought this plant had long gone: drowned beneath a veil of contorted hazel (Corylus avellana 'Contorta') overlain by an extremely vigorous Clematis 'Frances Rivis'*.

But it seems it must have taken heart from this poem and emerged triumphantly 6 feet up, using those very plants I thought had smothered it to support its new blooms. It's suffering from a touch of powdery mildew, which isn't surprising in view of the lack of rain we've had this year and my policy of minimal garden watering. I'll be thinning out the plants in this area of the garden to ensure there's a good airflow around them in the future.

* = the link talks about there being 2 forms of this Clematis, with the pictured 'Dutch form' acknowledged as the proper one and the 'English form' also sold as C. 'Frances Rivis' in the UK and elsewhere which is thought to be a form of C. 'Blue Dancer'. I'll be checking next spring to see which form I actually have.