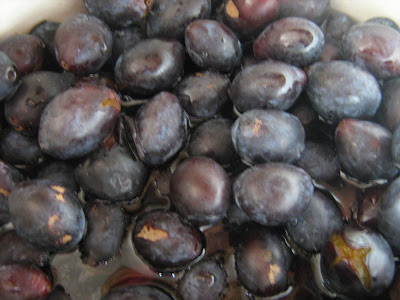 Over the past week or so I've been the lucky recipient of the fruits of friends' gluts, namely a carrier bag full of windfall apples and a similar amount of damsons once I'd shaken them out of K's tree. This in turn has led to a frantic amount of preserve making activity and we now have a year's worth of jars of various sweetmeats stashed away in the kitchen cupboard :)

These gifts arrived in the nick of time as we were about to enter a 'jam deficit'. We often have soup and bread for lunch and NAH likes to add jam to this usual fayre. I made loads last year which we've just finished and unfortunately various circumstances led to the store cupboard not being restocked over the summer*.

I've been merrily making apple jelly and cheese, plus damson jam and cheese. The damson jam recipe I found on the Cook it Simply website is so easy, I have no hesitation in recommending it to you [my notes are in square brackets]:

Makes about 6 jars - one of the better yields of jam in my experience.

* = a combination of missing the gooseberry harvest whilst away on holiday, so the birds had a feast of them; the rhubarb and ginger turning out a bit stringy this time; the hedgerow plums being far too small and out of reach to do anything with them; and a lack of raspberry surplus thus far owing to the recent drought :(
Fruit n Veg recipe