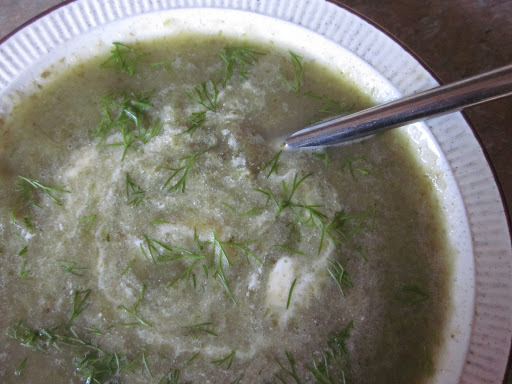 I had quite a pile of salad leaves after the final clearance of the summer salads beds, so after I'd washed them and put the best ones in a bag in the fridge*, I still had quite a few lesser quality leaves left over. I also discovered a cucumber which had hidden itself in the coldframe and needed eating up quickly.

With Saturday's colder weather, the answer came in the form of soup. This is a very flexible recipe, adjust according to whatever you've cleared from your plot which needs eating up now.

Ingredients - serves 4-6
To garnish (optional but recommended): Half-fat creme fraiche - or cream if you're feeling slim and decadent - and chopped fennel fronds (thanks for my seeds Joanna!).

Method
Serve warm, with a large chunk of bread e.g. multi-seeded or sourdough for a hearty lunch.

My soup was extremely quick to make and had a fresh, delicate taste. It reminded me of summer, but also had the warmth of winter. Whilst I've called it the Last of the Summer Soup, this version could also be made in the summer months and served chilled.

Variations
This is a great soup for anyone on the 5:2 diet, if the creme fraiche and bread are omitted.

* = has anyone else noticed how long hand picked salad leaves keep in the fridge? Much longer than the supermarket 'pillow' bags do.
52 Week Salad Challenge Food n Drink recipe