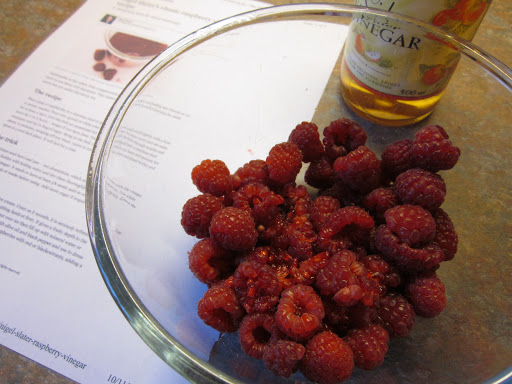 I picked the last of this year's 'Autumn Bliss' raspberries at the weekend and instead of scoffing them as usual, I decided to try making some raspberry vinegar. I eventually plumped for Nigel Slater's recipe via The Guardian. His version uses much less sugar than the others I found and is strained, so it has no pips :)

I substituted cider vinegar for the recipe's white wine vinegar and I steeped the raspberries for 5 days instead of the minimum two. The recipe also calls for a stainless steel saucepan for the cooking stage because the acid from the vinegar will react with aluminium ones. I don't have one, but I found the ceramic pan from my slow cooker was a good substitute.

I only had 250g of raspberries instead of the 450g given in the recipe, so I've adjusted the rest of the ingredients accordingly.


What the recipe doesn't mention is the rich ruby red colour of the resultant vinegar, which glows with goodness and promise :)

As well as mixing with olive oil and some crushed black pepper to make a salad dressing, Nigel Slater suggests raspberry vinegar can be poured over ice cream to make a piquant fruity sauce, or over ice and topped up with mineral water or lemonade to make a refreshing drink. It can also be added to a pan to deglaze meat juices.

Some of the other recipes I looked at mention raspberry vinegar is good for soothing coughs. I'm looking forward to this taste of summer helping to beat future winter ills :)

NB next week is Salad Days - I'm looking forward to hearing how you're getting on with your salad growing or eating :)
52 Week Salad Challenge Allotment Fruit n Veg recipe