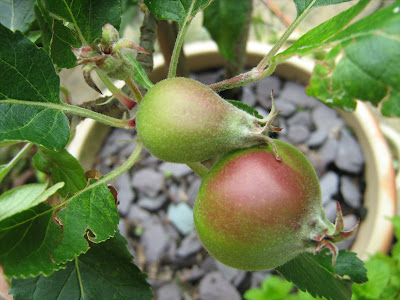 Spring saw the most fruit blossom I've seen on our trees: probably a combination of the hard winter then some relatively mild weather at flowering time which conspired to maximise the gorgeous froth we saw earlier this year. The weather was also mild enough before the frosts started up again to ensure the largest fruit set I've ever witnessed: each fruiting spur having at least 6 fruits (as many as 12 in lots of cases) beginning to swell and mature.
I was anticipating I'd have to do lots of fruit thinning this year. However, as usual nature is doing her job well and is sorting things out for me. There's now the most spectacular June Drop I've ever seen with my apple, pear and plum trees. It's the time of the year when damaged or smaller fruits simply drop off the tree, allowing their larger, more hale and hearty cousins to ripen into the harvestable fruit. I reckon the very dry weather we've had over the past couple of months is the reason for most of the fruit falling. After all, the tree wants to get some fruit to a viable reproductive stage, rather than as many immature fruit as possible. Water is the key element from now on for that goal to be achieved.
Of course, I'll still have to do some thinning soon (and picking up the windfalls in August/September), but the job's looking like it'll be about the same as usual now. Guess which apple I'll be leaving from those pictured, if the others don't drop of their own accord over the next couple of weeks. The one on the left looks like it'll probably fall quite soon, but I'm not so sure the one in the middle wants to go. Ideally I'd like to keep the one on the right, but if this one drops, I'm sure the middle one will still produce a tasty apple.
It's tempting to leave all of them on there I know, but beware: too many fruit can stress the tree. You'll get smaller, not so tasty fruit as a result and also risk the tree not producing such a good crop the next year whilst it recovers. Worse still, it might switch into biennial bearing and give you a crop every other year instead of an annual one. If that happens, then follow this advice from the RHS to bring your trees back on track.
Allotment Fruit n Veg Garden Incredible Edibles