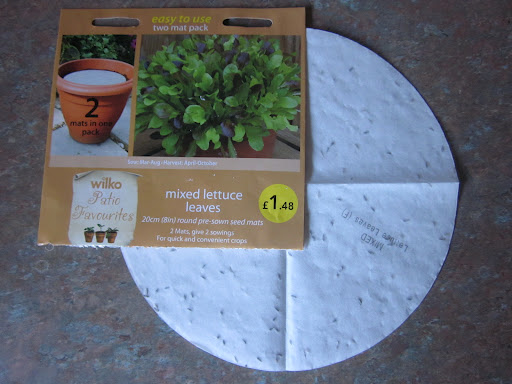 March is the exciting month when at last lots of possibilities present themselves in terms of seed sowing and summer harvests start their transformation from dreams into reality.
It's also time to experiment a little, so I was pleased to find the pictured lettuce seed mats in a local shop this week. I'll write about these more fully in a later post.
Here in the south west of England I've sown lots of other leaves this week. If you live further north you may have to wait until later this month - see my What's the Weather for Salad? post on how you can work out the best dates for salad growing where you are. Do also bear in mind how fickle a month March can be and the rate in which your particular soil takes to heat up and adjust your sowings (or protection) as necessary.
So far I've sown (mostly indoors and in modules, so the windowsills are getting a bit crowded!):
You could sow most of these outdoors if your soil conditions allow, though fleece may be required for frosty conditions. It's also time to start hardening off my lettuce sown in January/February ready for planting out under cover.
Other possibilities include (under cover of some sort if marked with a *, otherwise outdoors is OK):
Boy doesn't that make the 3-4 varieties found in shop bought bags of salad seem rather puny? I should be able to start cropping some leaves, such as the lettuce as soon as April. In the meantime sprouted seeds, pea shoots and microgreens are the order of my day.
Now Harvesting
Mags has shown us the harvest possibilities from her polytunnel with her beautifully labelled picture.
Or how about this little lot from Naomi:

@Malvernmeet Thank you! Yet to check polytunnel on western fringe but last I looked there was rocket,parsley,chervil, >> #saladchat 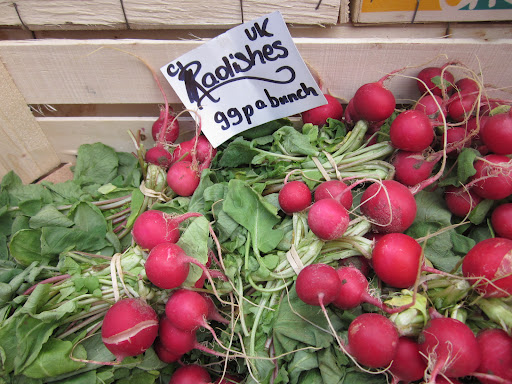 Salad Supplements
The new season's salads are just beginning to appear at the greengrocer's, like these radishes I spotted in the above picture in Bristol last Saturday. I'm not so keen on the roots, but the leaves grown as a microgreen to garnish our salads have become a firm, peppery favourite.
I don't know how well the pictured leaves would go down in a salad. Worth a try or a bit tough perhaps? If it's the latter, then they could be added to soups. If you like the roots, then they make a great salad supplement or you could try Yolanda's Radish sandwiches.
If you have a greenhouse or polytunnel, it's also time to start sowing those stalwart summer salad supplements, tomatoes and peppers. My windowsills are packed at the moment, so I'll be obtaining these via other means - more on this to come ;)
Carl has also posted a rather yummy looking Winter Panzanella recipe using pea shoots and foraged chickweed. Which reminds me, Emma has posted a rather handy guide on how to pick indoor grown peashoots so they grow again.
Those of you of a foraging disposition and looking for something other than chickweed to try may like this carrot and ground elder salad recipe. Apparently ground elder tastes like parsley, so if you've been battling it as a weed in your garden, you could change tack and eat lots of it instead.
What salad leaves are you sowing/eating this month?
52 Week Salad Challenge Fruit n Veg