Of Beetroot, Experiments and Damping Off 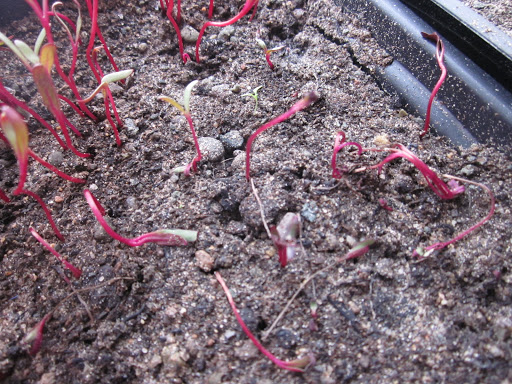 This post is for Bren, to reassure her that I haven't forgotten my promise to her to write about my experiments with growing beetroot for leaves during the winter...

...I speculated last year that seeing my autumn-sown leaves were doing so well - despite the frost - that maybe winter-sown ones might perform in a similar way to the previous successes I've had with pea shoots. Alys Fowler thought they wouldn't - when I asked her here - but I resolved to try a little experimentation for myself anyway. 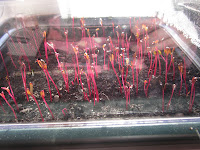 Armed with a fresh packet of 'Bull's Blood' seeds and a sparkling new propagator, I set to on 3rd January and made a thick sowing onto some seed compost. I covered them, then watered sparingly with a mist sprayer, added the propagator lid and left them on our bedroom windowsill to go about their business. As you can see, germination went well and I soon had lots of bright stems and leaves at the microgreen stage.

However, it's been a different story the past few days as the seedlings have gradually been succumbing to the dreaded damping off. It's the first time this fungal disease has happened to me, so I guess I'm lucky I've not had it before. Having had a bit of a #saladchat on twitter, it could be due to a number of reasons: too thick a sowing of seed; the type of compost I'm using (seed in this instance); the damp, humid conditions under the propagator; or any combination of these.

@saralimback also asked why I was growing my beetroot in a propagator because they don't usually need one. I explained I'm also experimenting with seeing whether a propagator can be used to bring on salads for an earlier crop over the winter. My pea shoots take around 4-6 weeks to crop at this time of the year, so anything which can bring them on more quickly is welcome. I'm also wondering whether a propagator might be a protective help for windowsill growing. Night time temperatures can still drop significantly behind those curtains during cold weather and thus slow down growth for a while. Perhaps I should be using the lid until germination and then only for any cold nights afterwards.

Despite these setbacks I'm not downhearted and I'll by trying this experiment again. My pea shoot experiment sitting alongside the beetroot one is quite different in its results so far. More on that on Friday.

NB The first of this year's Salad Days is on Friday (25th Jan) - stand by to update Mr Linky with your posts!
52 Week Salad Challenge pests n diseases Testing