February 13, 2016
Once again I've found a garden visiting road trip is the perfect way to cheer up February, my least favourite month of the year.

I reprised part of last year's Snowdrops on Tour and added Clumber Park to my itinerary on Karen's recommendation. Just seeing Lime Tree Avenue, the longest in Europe with over 1,000 trees, ensured this part of my trip didn't disappoint.


My trip started with storm Imogen flashing and rumbling a warning at me, and thankfully a swift escape north and eastwards meant I missed the worst of her ravages. Despite that, Naomi and I were mightily pleased Karen had arranged for us to take refuge in Easton Walled Gardens' summerhouse for a picnic before we toured the garden. 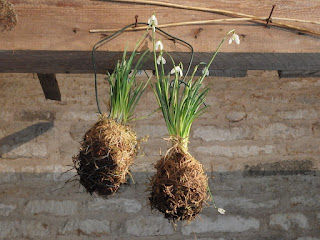 As we were with Karen we were able to have a nose around doors which are usually kept closed, including the flower workshop.

Here Alexandra was busy getting arrangements ready for Easton's snowdrop event. I was particularly intrigued with these hanging snowdrop balls, created using a technique called Kokedama, from Japan.

It involves wrapping the plant in soil, followed by a layer of moss, then tying the bundle together ready for hanging, with string in this case.

If you'd like to make your own Kokedama, the link shows you how. When it feels light, soak the ball for 30 minutes (or until it feels heavy again) to keep the display looking fresh and more permanent.


We must have been in the calmer eye of the storm for our garden tour, because the drive up the A1 to Hodsock Priory in lashings of rain was horrendous. Luckily, the generous hospitality of the Buchanan family soon restored my jangled nerves.


Tuesday dawned fair and without a breath of wind; the perfect day for a spot of snowdrop peeping with Naomi, Karen and Alison. It was great to meet snowdrop expert John Grimshaw, listen to his insights and see which aspects of the garden caught his eye. Here's what caught mine... 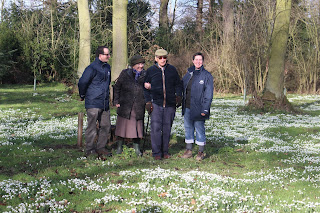 This year marks the silver anniversary of the commencement of Hodsock Priory's snowdrop days, who were one of the first - if not the first - major snowdrop garden to start this popular activity.

George Buchanan (left in the picture) recounted it started with just one Sunday 25 years ago with a biscuit tin to collect entrance fees, a kettle, and much trepidation over whether anyone would come.

600 visitors gave them their answer and 'snowdrop day' now extends to 4 weeks. It was great to see the Buchanan family enjoying Tuesday's sunshine for their celebratory photo opportunity.

Then I had a brief side trip on the way home to nearby Clumber Park. It's vast, which meant I only had time to trot round a small part of its 3,800 acres. It's well worth a visit despite the demolition of the huge country house which was once at its heart.

There's a pleasure garden with a collection of large specimen trees, a large serpentine lake which extends as far as the eye can see, and plenty of eyecatcher-style follies dotted around the grounds. There's a Grade I listed church too, which hints at the grandeur of previous times.

I can also heartily recommend the venison one pot stew I had for lunch. Charlecote Park's recipe looks the closest to the version I enjoyed.