Showing posts from September, 2016
Show All

Gardeners Question Time: In which "Dog's bottom" may be said 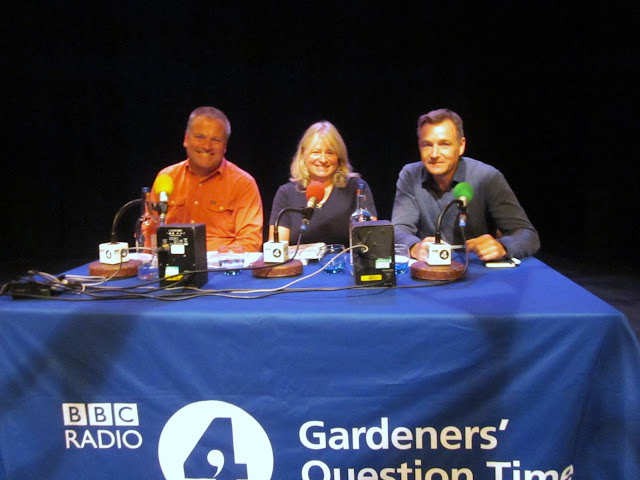 My third visit to a recording of Gardeners' Question Time last week didn't disappoint. Eric Robson was in the chair (hurrah!), with Matthew Biggs, Anne Swithinbank and Chris Beardshaw ready to answer our questions.

I went on my own this time, but that didn't matter as there were plenty of people to chat to during coffee beforehand and whilst we took our seats. I met a mother and daughter celebrating their birthdays that day, plus I sat next to a couple who were at the same recording I went to three years ago.

All manner of plants and photographs were clutched by prospective questioners, all hoping to be called down to the front row of seats reserved for those chosen to pose their query. Producer Dan reassured everyone,  'If you're not chosen, it doesn't mean you're a bad gardener'.

Our powers of clapping were tested, and a few gardening jokes told to make sure we were in good humour, whilst Hester posed with her enormous recording boom, and Pete and Pe…
8 comments
Read more 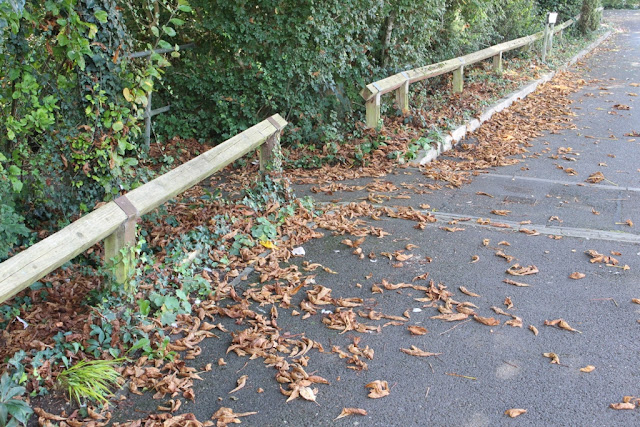 With autumn comes new seasonal tasks, especially the collection and disposal of leaves. This usually causes a moderately tense time here at VP Gardens as NAH likes things to be neat and tidy with not a fallen leaf in sight. I prefer the leaves to gather over time, so the task is completed in one go.

It doesn't help that our neighbour puts us to shame most weekends by blowing the fallen leaves at the front of our properties onto the public land next door. I used to have a blower-come-collector-come-shredder for gathering the leaves up ready to make leaf mould, but I found it far too heavy to use.

Since those days I've adopted a Compost Direct approach to autumn leaves, where I sweep them up into useful piles and then apply them directly to borders. It's easier, yet still hard work, best left for a cooler day when I need a good work out to keep warm.


This year is different, as I'm now the proud owner of a battery powered leaf blower courtesy of the kind people at STIHL.…
2 comments
Read more

I don't usually go for coleus, but these three simple pots round the corner catch my eye every time I go past them.

They're placed below a window at the end of a drab drive, with colours that blend with each other well and also complement the brickwork of the house. This photo was taken on a dreary day and their fieriness helps to lift the gloom.

I think they're fabulous, how about you?

Update October 4th 2016: It looks like the outer coleus are a new cultivar called 'Campfire', spotted amongst 56,000 seedlings at the University of Florida in 2012, or possibly 'Redhead'. It depends whether the orange of 'Campfire' has intensified, like the blurb in this month'sHTA News says it does.

This is a tender perennial of hardiness H1C which means it can be grown outdoors in the summer.

Update same day: Ball Colegrave introduced these onto the UK market this year, so I was able to get their American company to confirm the cultivar via Twitter.

My garlic's having a bad hair day 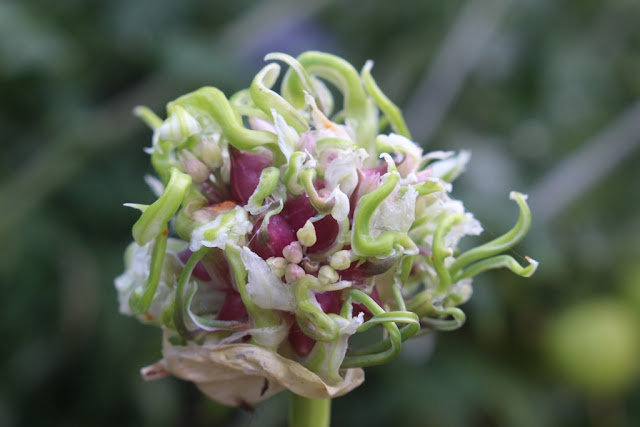 This scene makes me smile every time I step out onto the patio. A couple of the spare trial garlic cloves I planted for green garlic developed a scape, then from these little miniature garlic cloves called bulbils formed.

Now these have started to sprout and they look like they're having a bad hair day. I love them for it. I'm not sure which of the varieties they're from as I planted the spares in a random fashion in their pots.

I suspect the humid weather over the past few weeks has encouraged the bulbils to sprout and their obvious viability means I'm having a go at bulking them up into garlic suitable for cropping. Bulbils are usually dried and stored much earlier in the year, but seeing we're close to autumn garlic planting time, I see no harm in a little experimentation right now.

Usually I'd save some of my garlic from my main crop for next year, but even the resistant varieties eventually succumbed to rust* up at the plot. Therefore it'll be better …
4 comments
Read more 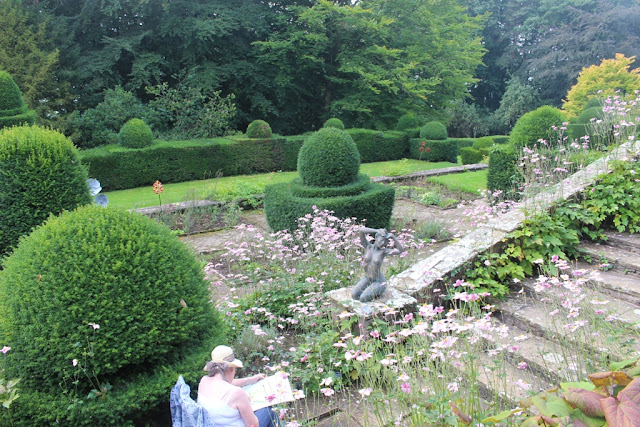 There's just over a week left to visit Wyndcliffe Court before it closes to the public for good and I'm pleased NAH and I took some much needed time out to hop over the Severn Bridge to see it earlier this week. I find a trip over water - no matter how brief - always feels like a holiday, especially as we went 'abroad' into Wales this time.

We arrived just as a group of artists were finishing their morning of sketching and painting, and we enjoyed our view of one of them beavering away whilst we relaxed over our lunch.


Much of the summer floral colour had finished and autumn was just beginning to show its hand, but Wyndcliffe Court is an Arts and Crafts house and garden, with plenty of structure and garden rooms to provide lots of interest for our visit. This is the sunken garden and summerhouse.


The garden lived up to its name with plenty of sculpture to admire. I was particularly taken with this one, which provided a viewpoint from a number of vantage points. NAH be…
9 comments
Read more 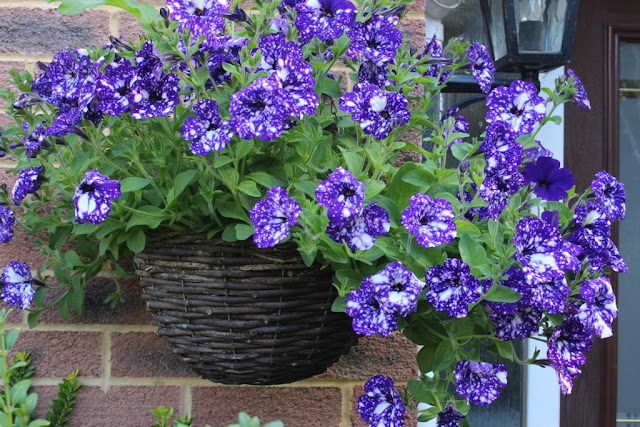 I'm pleased with the performance of the Petunia 'Night Sky' plants I've trialled this year. It was my pick of the bunch when I visited Thompson & Morgan in 2015, and that early promise hasn't disappointed up close and personal back at home.

Plants were quick to bloom and they've come back from some gross neglect on my part as I left them to flounder in 9cm pots for far too long. I finally got round to planting up my hanging basket in mid July, cutting back my stringy, yellowing plants to the first leaf (some of which were extremely scrappy) and as you can see, they've revived spectacularly.

Some experts I've spoken to have questioned stability as the flowers are so variable. Graham Rice has tackled this with aplomb in his article linked to above. Apparently temperature is a factor which determines the form the flowers take, and if you look carefully in the above picture I have evidence of the high temperatures he talks about, which turns flowers co…
16 comments
Read more

Wordless Wednesday: What would you ask? 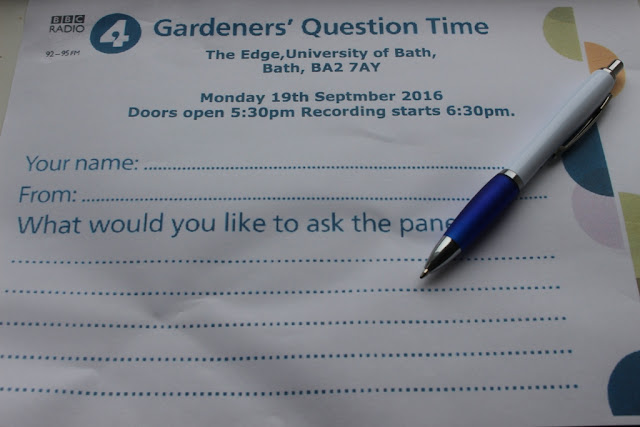 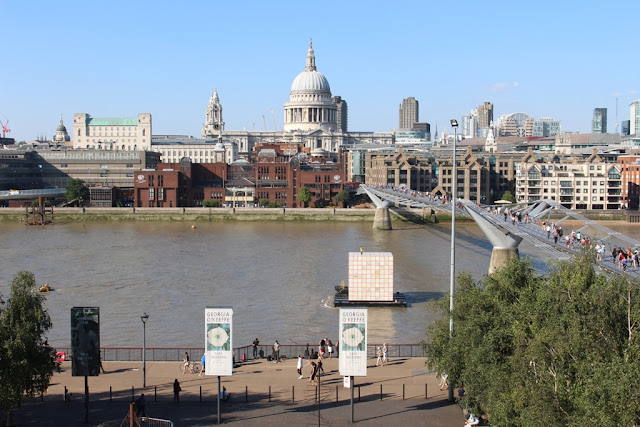 There's an amazing opportunity to see the works of seldom-seen-in-the-UK American artist Georgia O'Keeffe at the Tate Modern until 30th October.

I first came across her work when I studied photography A Level, as she was one of the iconic '291' group who surrounded pioneer photographer Alfred Stieglitz. She became his muse, then his wife. Much of this modernist group's work e.g. Paul Strand and Ansel Adams, as well as Stieglitz himself is on show too, so this is pretty much two exhibitions for the price of one.

That doesn't mean the display of O'Keeffe's work has been stinted, as there are over 100 of her paintings and drawings on show, as well as notebooks, supporting documentation, and even a rare example of her sculpture.

Here's one of Stieglitz's photographs of her. Despite being nearly a century old, it's a striking, modern looking photograph.

She comes across as a fiercely independent woman, who held her own in the (mainly) world of m…
2 comments
Read more

Thinking Outside the Box 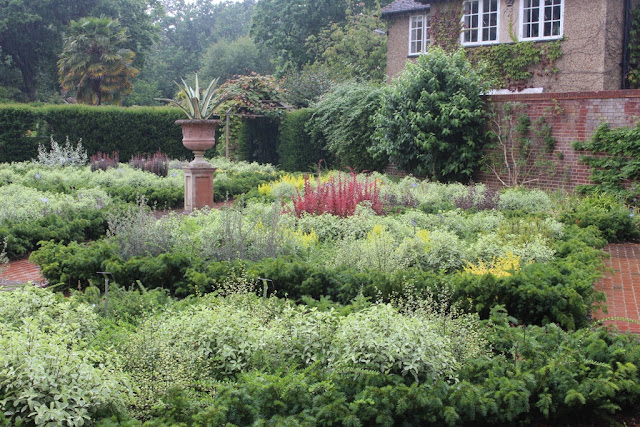 There's always something new to see at Wisley and I'm particularly taken with their 'Thinking outside the box' trial plot. As you can see, it was an interesting display, even though it was raining at the time.

Enquiries to the RHS concerning box blight and the box tree caterpillar have increased substantially in recent years, and Wisley itself has succumbed to both woes. As it says on one of the information boards for this display... "Sadly we suffer from both problems at Wisley and have only a small amount of box left."

The RHS has plenty of suggestions on its website for suitable small-leaved alternatives to box such as Lonicera nitada, Ilex crenata, yew and various berberis. I've pondered many of these as I'm thinking about replacing my front lawn with a small knot garden. I've decided not to use box because of the potential problems, and had Euonymus fortunei from their list as my front runner. It's being used successfully for this purpos…
7 comments
Read more 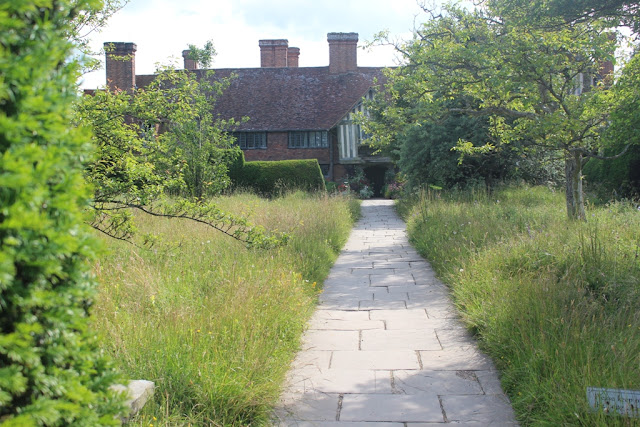 I can't believe it's taken me a couple of months to tell you about my return visit to Great Dixter. You may have guessed something was afoot because I referred to it in my Poppy Appeal post and The Secret of the Erigeron Steps.

That's the thing I find about Great Dixter; it needs more attention than I can write about having a wonderful time. Each visit informs my gardening like no other garden does, which takes more thinking about... which in turn takes time.

Today feels right for a more relaxed wander through the garden, so let's go...


Anyone who joins the team at Great Dixter is encouraged to experiment with the famous pot displays. These are refreshed every couple of weeks or so, and they may also give a clue to planting seen elsewhere in the garden.

For example, there are some antirrhinums in the above display which echo one of the borders closest to the house.

This is an experimental border, with some different colours added this year to previous plantings. There…
16 comments
Read more 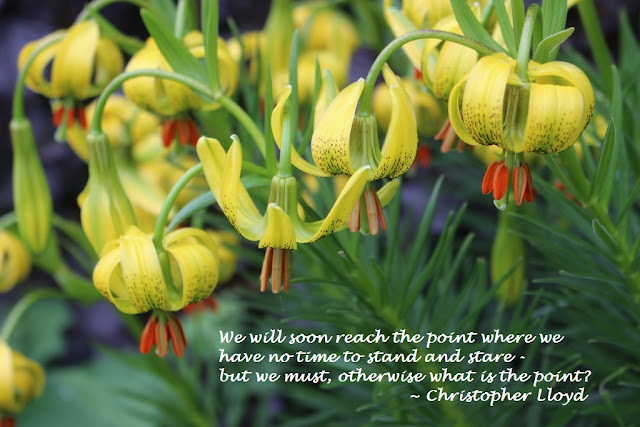 This is another photo from our visit to Helmsley Walled Garden earlier this year. Fortunately, NAH was happy for me to have a wander round the garden and take plenty of time to stand and stare.

The quote was on one of the blackboards at the garden entrance (see July's Muse Day for another) and it seemed appropriate to transfer it to a photo of my first closer view of these lilies. I've only managed to see them at a distance previously.

Where's your favourite spot to stand and stare? I also like warm summer evenings here in the garden, watching the bats zoom around at dusk.
4 comments
Read more
More posts