Showing posts from October, 2019
Show All

Like the film of the same name, there had to be a sequel to the Halloween garden I found in 2013 . Today's example takes the display a little further with the introduction of a "Chamber of Horrors" aka the "Brexit Nightmare" garden. It injects some fun into these less humorous times and like the garden's creators I'm posting this photo as such, not as a political statement. They've placed buckets on their railings in order to raise funds for an inspirational local charity, Jamie's Farm . Last year they raised £1,500. Unlike my previous Halloween garden, which just focused on some of the more traditional imagery, this is an example which won't stand the test of time. I have an inkling the display was created before this week's vote on having a general election. Otherwise their "Chamber of Horrors" may have been called "The Nightmare Before Christmas" instead. 😉😜😊
4 comments
Read more 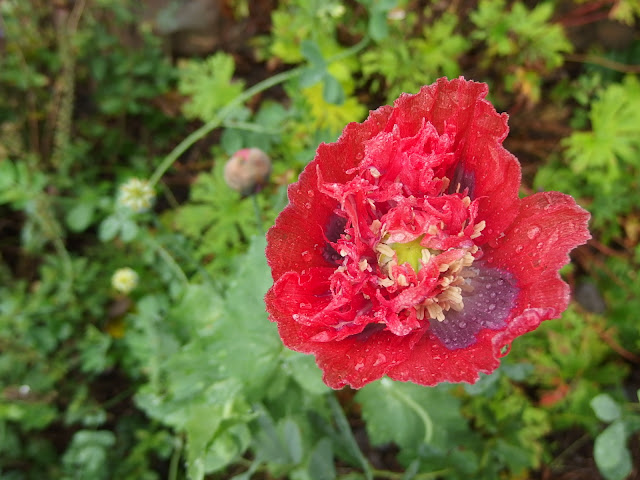 I have a late season surprise from the garden for this month's Blooms Day . I'm calling her 'The Floozy' because she's flaunting her frilly knickers in the heart of her bloom and also because I've no idea where she's come from. Poppies have a great way of scattering their seeds by launching them through the top of their seed pods whenever the wind blows, but I haven't seen any in my neighbours' gardens, so I don't think this is the source of my welcome visitor. Nor have they come from the prolific poppies I showed you a couple of years ago from the main road nearby. Those were  Papaver rhoeas aka common or corn poppy. This is a completely different species,  Papaver somniferum aka the opium aka breadseed poppy. Poppy seeds can last for decades and spring forth again when the soil is disturbed, so perhaps this is the source of my surprise? Possibly, though seeing the land here was a farmer's field previously, it's unlikely. Bes
8 comments
Read more

Today is National Poetry Day and this year's theme is 'Truth'. I've chosen Rudyard Kipling's poem at the end of the Elephant's Child because its guidance helped me through most of my career. When I worked in IT I'd often write What, Where, When, How, Why and Who at the top of my notebook when I went off to meetings, especially at the start of a project. I was even given a nickname -  Mrs Why  - by my colleagues! Before then I must have had them in my subconscious as a scientist, and I've since realised these simple words are at the heart of my blogging too. Now they're worth bearing in mind when reading and watching anything on the internet 😉 I took the photo at the top of this post earlier in the year; staring out of our bedroom window to the birch tree at the bottom of our garden is where you'll often find me pondering... or day dreaming. There's a display of poetry in Chippenham's shop windows today. I'll take a stro
4 comments
Read more
More posts