Showing posts from March, 2021
Show All

Sometimes 'wrong place' can be right 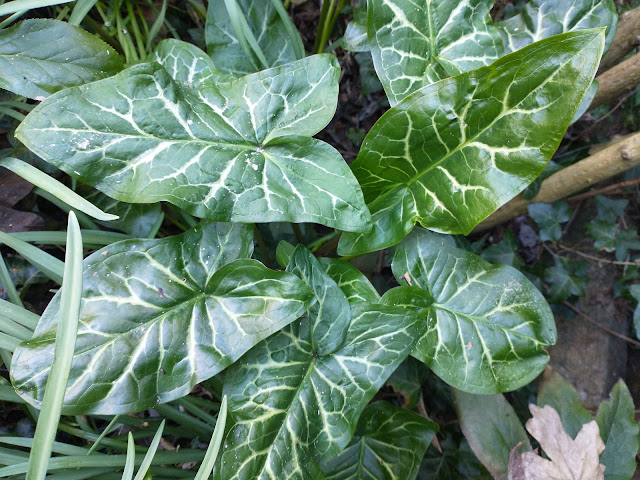 I've seen quite a lot of online chat about this striking plant lately. Firstly asking for an ID - it's Arum italicum subsp. italicum 'Marmoratum' by the way - quite a mouthful, eh? With the ID duly confirmed, the conversation then turns to its renowned thugish qualities, with many a resolution made for it to never darken the commenter's garden ever again. I can offer an alternative viewpoint. It's never been a problem here at VP Gardens . Its marbled foliage brightens many a winter's walk here and then it quietly starts to fade away into summer oblivion around about now.  I reckon the key to my success and higher regard is I've planted it in the wrong place. The commenters' dire warnings centre around the plant's spathe replete with tempting red berries poised ready for the birds to eat and distribute its seeds elsewhere. Mine has never done that and a quick check of the plant's requirements shows its preference for sand or loam soils. Mi
2 comments
Read more 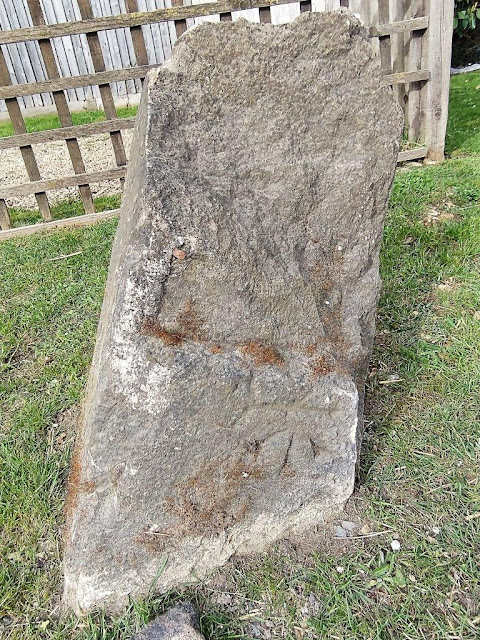 Last weekend's walk was a new-to-me-route from home and full of surprises. The quest was to find Lanhill Longbarrow, something I've known about for a while and probably Chippenham's oldest feature, as it dates back to between 3,500 and 2,500 BC i.e. Neolithic times.  The first surprise I found was the pictured intriguing stone at the side of the road... it looked ancient - especially as my head was full of images of standing stones at the time - but what looks like a mason's mark towards the bottom made me think it's not quite as old as it might be.   Then I found the footpath to the barrow, which was surprisingly not at the top of the hill where I thought it would be, especially as there's a tell-tale clump of trees, but I liked the view over the surrounding countryside anyway.   As I walked down the hill, I suddenly saw a low-ish mound with a gaping black hole. I had found the barrow! The chamber is one of three the mound is reported to contain, but this is th
2 comments
Read more

Let's hear it for the self-sowns 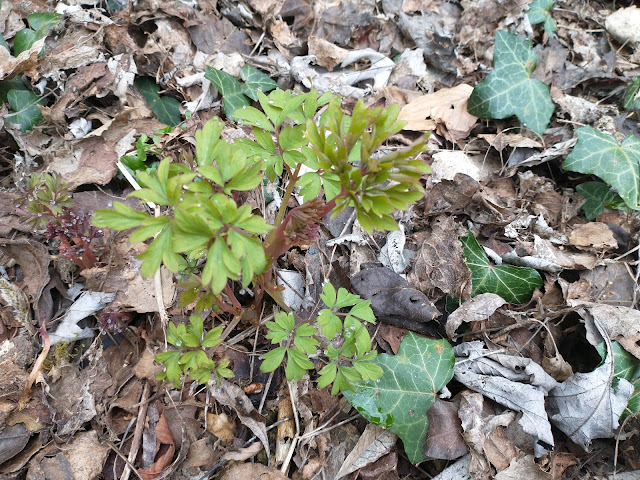 Over the past couple of years it's interesting to see what has chosen to appear in the gravel path in the back garden. Some are plants which have hopped over from the borders where I planted them and others have reappeared many years after I last had them here at VP Gardens . I think most of them are from my own activities rather than blow-ins or bird distribution from elsewhere. They give me a neat dilemma: do I treat them like weeds and get rid, or should I do something with them? Luckily most of the plants that have appeared so far are either low growing, or not enough to prevent our use of the path for what it was designed for. They could stay put if I so desired. The warmer weather over the past week or so has signalled it's time - at last - to clear away the over wintering stems and the rest of the debris I left in the garden to shelter overwintering insects and to feed the birds. It's also decision time on what to do with those self-sown plants. I've decided to m
12 comments
Read more 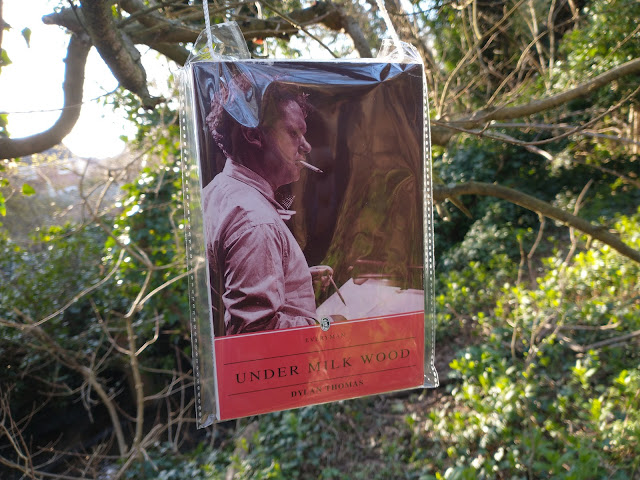 I spent some time this morning looking for a suitable poem about spring or blossom to mark today's World Poetry Day and the first day of spring. For some reason nothing seemed quite right, so I set off on my daily walk to help clear my head and come back refreshed. Little did I know I'd find some quite different inspiration towards the end of my walk. We must have a Dylan Thomas fan amongst our midst, who has hung up various covers of his works along the path by Hardenhuish Brook. A quick look at the pictured work online, and at last I have my poem - albeit nothing to do with spring or blossom - in the form of the extract below. It's the line about seeing the best side of people, not their worst which stands out for me. I readily admit I don't always manage that, but I do strive to see the best in a situation, and that resonates particularly in these strange times... "Every morning when I wake, Dear Lord, a little prayer I make, O please do keep Thy lovely eye On
4 comments
Read more 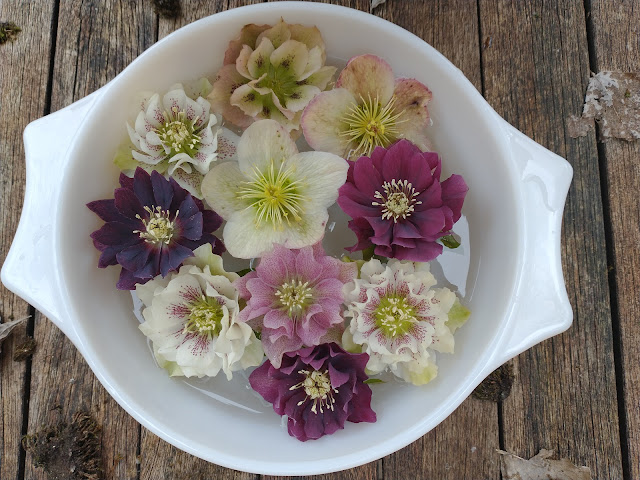 I confess I find it difficult to cut flowers from the garden and bring them indoors, but after hearing Jonathan Moseley's inspirational talk at Malvern last year, I'm striving to change my ways. My first attempt is this bowl of floating hellebore flowers from the back garden. I'm so new to this game you can see I've pressed one of my cooking bowls into service in the absence of something more special. It doesn't really matter as what really counts is the result, where the beauty of the flowers is brought sharply into focus. I have a selection of unnamed doubles in the back garden, plus a couple of H. ericsmithii 'Winter Moonbeam'. The latter are a little past their best, but show hellebores can continue to look good after then. I have some single flowered ones in the front garden too, but because that's north facing, they've yet to bloom. I don't know what they are either; they were given to me by a friend from choir, so they're probably
13 comments
Read more

A banner for bees 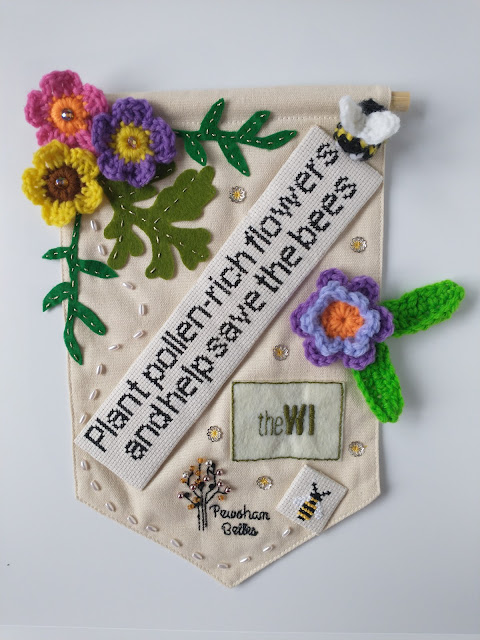 One of my personal Lockdown challenges last month was to create a banner for International Women's Day (today) to illustrate a WI campaign which has meaning. Naturally, the most garden related one was the one I picked, especially as the 2009 campaign SOS for Honeybees originates from a Wiltshire WI. I've only recently come across the term craftivism , a gentler, more mindful way of making a point about an issue or to raise awareness of it. I'm particularly struck by the work of Sarah Corbett and her Craftivist Collective  and it was a couple of her talks plus the recent BBC4 documentary on the subject which inspired my own banner making. I was keen to show something more practical which anyone could go away and do, hence the central message about growing pollen-rich flowers in the garden. But which flowers are pollen-rich? This is a subject I plan to return to from time to time this year here on the blog as I look into the subject more. I made a good start last week for Mu
3 comments
Read more 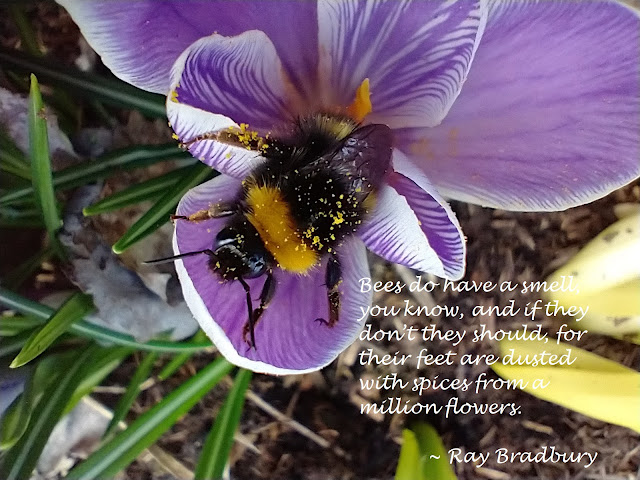 I love how looking for a suitable quotation for a photo and Muse Day can lead on to further investigation... "Bees do have a smell"... do they? Indeed they do, honeybees at least. It's all down to the pheromones they release. According to this article the alarm pheromone which prompts honeybees to attack and sting - sometimes en masse - when threatened is strong enough to be smelt by humans and is similar to bananas. I had to read this quote twice because I'd mentally added 'sense of' before smell. Another quick googling and I've learned their  sense of smell is far better than taste. According to the North Shropshire Beekeepers Association their sense of smell is far greater than dogs and some bees are used to detect landmines. Under normal circumstances this highly tuned sense is needed for pheromone detection and they have smell sensors in their mouths, antennae and the tips of their legs. Back to my photo... I had a wonderful time on Saturday wat
8 comments
Read more
More posts