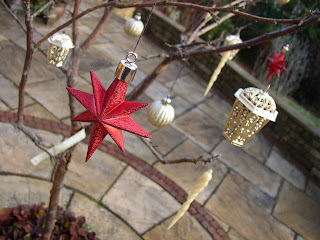 Some suitably festive decorations in my garden
Seasons Greetings to you all and here's to a cracking 2010. Like many of you, I'm taking a break until the New Year, though ABC Wednesday will pop-up on the allotted day and hour next week to see what's what for the letter X.

To send you good cheer, here's the Gower Wassail from me and the rest of the Wiltshire Wailers at Stourhead last Sunday. Update: sadly this video is no longer available :(

In the meantime until I return, you might also like to have a look at everyone's contribution for this month's festive edition of Out on the Streets. Do also follow the link if you're ready to add your own contribution to the list :)

Since September's OOTS, Leamington Spa station's garden has been voted Britain's best, Ken Livingstone has had a go at Boris Johnson over London's public spaces, Jakarta is giving its petrol stations a green makeover, Karen over at Greenwalks has been looking at street trees and National Geographic has showcased some mouth watering green roof photographs.

Last but not least, Garden Wise Guy says It's Time to Unite in the Name of Ugly ;)

Happy holidays everyone and see you soon!
choir Out on the Streets Public Planting time out