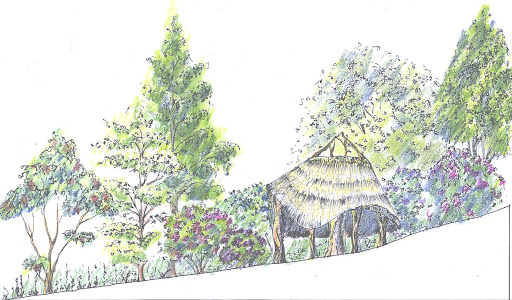 
I'm already looking forward to Chelsea very much particularly because some unusual, if not down right unfashionable gardens are due to hit Main Avenue this year.

If you'd told me previously a caravan was going to be a central feature to a show garden - even one as smooth and curvaceous (and show garden practical) as Doris - then I would have laughed. But having seen designer Jo Thompson's tweets and blogs on the subject of her design for The Caravan Club, I've been converted to the cause. NB Jo will be at the RHS London Show tomorrow to talk about her design.

Chris Beardshaw marks his Chelsea return with the pictured Furzey Garden. This will occupy the Embankment site, host to Diarmuid Gavin's 'Wonkavator' last year and it couldn't be more different. A woodland garden should suit the site very well and whilst rhododendrons and and azaleas are not the usual flowers seen at Chelsea, the show's timing is perfect for them. Besides having a non-ericaceous garden to celebrate the good work carried out by Furzey's Learning Disabilities Team and the garden's 90th birthday wouldn't be true to its sense of place. Indeed some of the plants included in the design are named after the gardens e.g. Erica darleyensis ‘Furzey’ and Primula 'Furzey'.

As well as being unusual, it strikes me both show gardens are more realistic in their concept, yet still have room for designer flair and some Chelsea bling. If these two examples are representative of what we'll be seeing later, then we're due for a refreshing change this year :)
Showtime