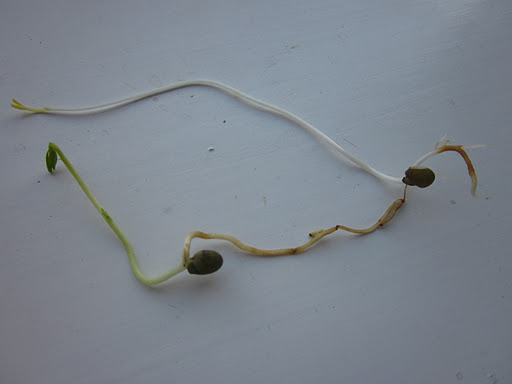 One of the things I've learned since starting The 52 Week Salad Challenge is that the beansprouts we find in the shops are sprouted in the dark and under pressure. I'd always wondered why the ones I grow on my kitchen window turn out so differently and now I know.

It got me pondering how different my sprouted seeds would be depending on whether I grew them in the dark or light. Sprouted lentils have become a firm favourite with NAH lately, so I resolved to try growing some in both light and dark conditions.

I've grown 2 lots of seeds in the same way as outlined in my Let's Eat Shoots and Leaves post, except for one batch has been sitting in the airing cupboard for 99.99% of its allotted 7 days. The photo shows the results, with the air cupboard grown lentil posing at the top.

It's interesting to see how the seedling part of the air cupboard grown lentil is pale and stretching itself to find the light (ie it's etiolated) but the root is much shorter and branched already. The kitchen windowsill grown one is stubbier and greener in colour as the seedling leaves are beginning to unfurl and produce chlorophyll.

There was little to choose between the two in terms of taste and weight of crop produced, though I found the dark sprouts to be tougher and a bit chewier than their light grown cousins. My Joy Larkcom book also says light grown sprouted seeds are more nutritious. Even if the reverse was true, I'd still stick with my windowsill growing. It's very easy to forget the ones in the airing cupboard - it's taken me a couple of attempts to get them to the 7 day sprouted stage!
52 Week Salad Challenge Fruit n Veg Separated at Birth Techniques