Last year this rather exotic looking flower appeared on mine and several other allotments for the first time. Having been stumped (again) by Mr Allotment Warden as to its identity, I rushed home to find out what it was. It's salsify, aka the marvellous Jack Go To Bed At Noon - named as such because its flowers always close by midday. 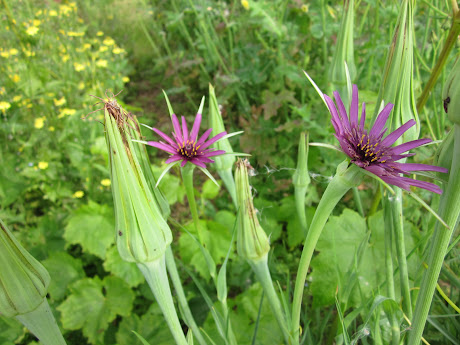 Here you can see both open and closed flowers - making it seem even more exotic and alien than in the first picture. I think this must be the cultivated version because the flower in my Francis Rose Wild Flower Key looks exactly the same in form, but is bright yellow in colour and called meadow salsify. 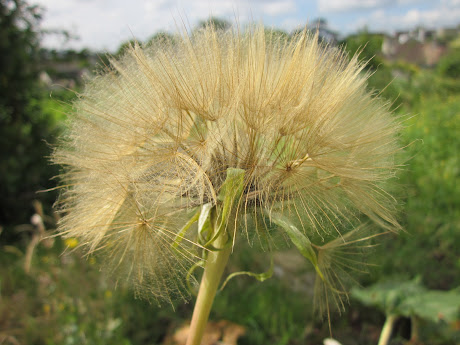 Its other common name is Goatsbeard, which must be a nod to the fantastic dandelion-like clock which forms the seed head. With 'parachutes' like those shown above, who knows how far our plotted plants came from. I rather like the photographic dissection of the seedhead found in this link.

Salsify is edible: its lateral shoots and flowers can be used in salads or lightly steamed. The root is harvested come the autumn and cooked with garlic, cream and butter. Yum.

I must remember to harvest the seeds, to guarantee its return to my plot next year.
Allotment Fruit n Veg Incredible Edibles