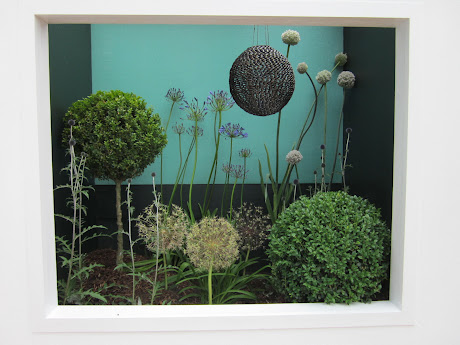 The long running debate over gardens as art has been turned on its head at this year's RHS Hampton Court Palace Flower Show via the original and very clever Picturesque by Melissa Jolly. This garden is laid out in the form of a typical 'gallery' with several designs within representing famous pictures and art installations, many of which have a garden theme. The above picture shows an interpretation of Wassily Kandinsky's Natural Spheres. A Monet, Rousseau, Hockney, Mondrian and Damian Hirst are also represented.

This garden is not only thought provoking, it's also witty. I loved the play on the word Picturesque which spans both the worlds of art and garden design; the familiar 'Artist's Statement' next to each 'artwork' explaining how the original had been interpreted; the use of Gladioli to represent Mondrian and the very spiky looking air plants replacing Damian Hirst's shark. I emerged from this 'exhibition' with a smile on my face.

Elsewhere there was much to stimulate further thought in this category and Arabella Sock has shared hers and shown you lots more (both Conceptual and Show Gardens) in her latest post.

Finally, I'll leave you with part of Excuse Me Whilst I Touch the Sky - you may also like to look at this more general picture of the garden whilst the designer was having her photo taken. Many purists will hate this one for its use of upside down plants, but I loved it for its simplicity and sense of playfulness (especially all the garden tools around the central structure) as well as its reference to one of my favourite songs by Jimi Hendrix. It also reminds me of the song Downside Up* by Peter Gabriel, which is all about lying on the ground staring upwards for so long, you believe that the sky is now below you.

There's also been some speculation this picture might become my new Avatar... 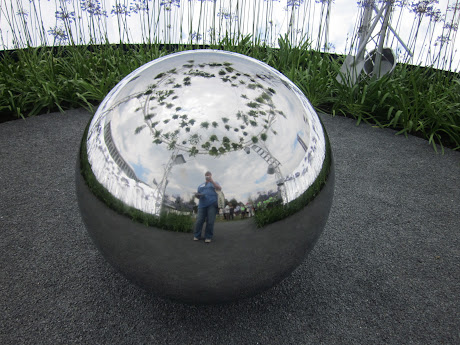 * = especially when you see what happens after about three minutes...
RHS Showtime