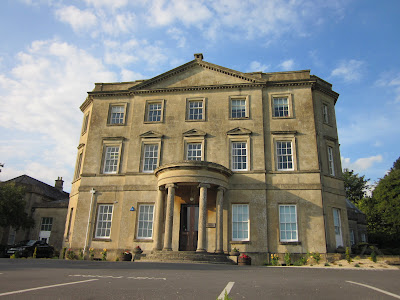 Since March this year I've been attending a Zumba dance class at Hardenhuish school. This takes place in the gym which has the typical look and smell of any school gym built in the 1950s or 60s. Despite that, the class is a lot of fun - it's a bit like aerobics, with lots of moves from salsa/ Greek/ Bollywood/ belly dancing thrown in for good measure. I'm useless at it because it moves so fast, but I reckon that jumping around for an hour looking silly (and giggling a lot) has to be doing some good.

Whilst the school dates from the 1950s with various additions across the decades, the grounds are much older. They house the pictured rather stately Hardenhuish House and the grounds are the parkland of its former estate which still retain much of the feel of those grander times. The estate has been nibbled around the edges somewhat: part of it is now the Donkey Field which we encountered for the letter D and you've also seen the rather fine St Nicholas' Church in the letter C, which once served the estate but now lies outside the school grounds. I believe my allotment was also part of the estate and is bordered by one of its ancient hedgerows.

The house is lit up at night and if I peer very carefully through our bedroom window, I can just see it looking rather ghostly in the distance. It seems rather weird to be able to see such an old building (it dates from around 1773-4, though the Manor of Hardenhuish itself dates back to Domesday Book times at least) when we're surrounded by houses on a relatively newly built housing estate.

This is for ABC Wednesday and is the last of my themed posts about Chippenham. I've enjoyed putting these posts together and I hope you've enjoyed reading them. I'll make a summary list at some point to go into my Chippenham links in the right sidebar.
ABC Wednesday Chippenham time out