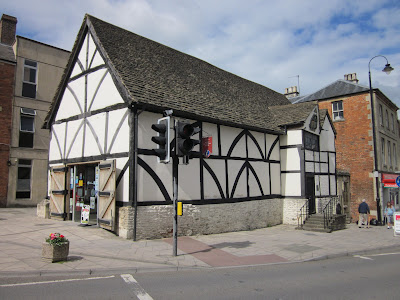 The Yelde Hall is one of the oldest and most striking of Chippenham's buildings and you've seen glimpses of it already, filed under T for Tourism and Q for Quaint. It also has a version of U for Unity and Loyalty: the badge you can see at the top of the building over the steps to the right is an older version of the town's coat of arms.

Yelde is another form of the word Guild, showing that it was an important building in the town: the place where much of the Chippenham's business and justice was administered until the town council moved to its current premises down the high street in 1841.

The Yelde Hall has 2 floors and several rooms. Upstairs was used as the council chamber and the large hall to the side possibly as a storage barn when it wasn't being used as a meeting place or courtroom. Beneath the council chamber was the Blind House aka the town's gaol.

Over the years the hall has had many other uses. A 16th century petition to Elizabeth I shows it was also the local community centre and church hall (St Andrew's church is just over the road); when the town council moved out in 1841 it served as an armoury for the Chippenham Company of Volunteers. Then the town's fire brigade used it as its headquarters from 1910/11 until it moved to a new premises in Dallas Road in 1945/6 (the sources I've used give slightly different dates for when these last two events happened).

In 1963 it re-opened as the town's museum and even today the upstairs room shows a representation of the council chamber as it might have been in 1816. The rest of the museum is now housed in larger premises in the Market Place nearby and the Yelde Hall's current incarnation (since 2003) is to serve as Chippenham's Tourist Information Centre.

This is for ABC Wednesday (post delayed owing to Hampton Court coverage last week) and forms my penultimate post about Chippenham in this themed series.
ABC Wednesday Chippenham