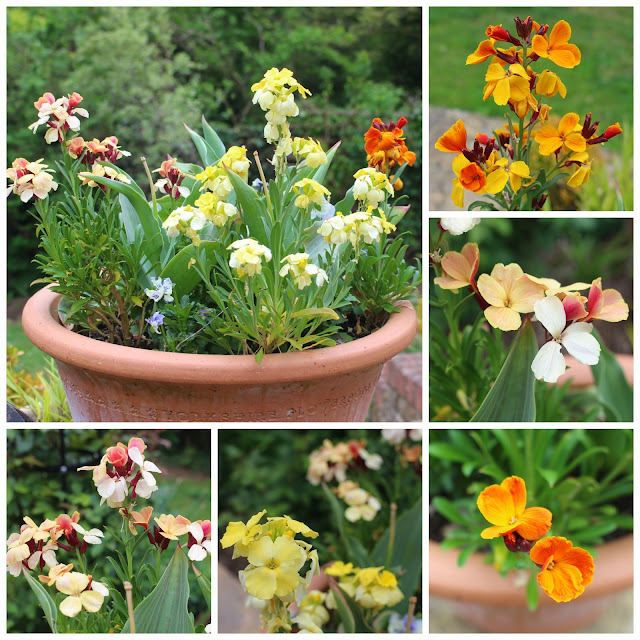 Unlike most gardeners, I've never grown spring-flowering wallflowers before - there's always a first time for everything! I was given a mixed bunch of plants after my visit to T&M's trials ground last year, which was handy as they're biennials.

Mixed bunches of plants are always a bit of a shot in the dark as you're never sure what you're going to get. Most of my pots have turned out to contain just the burnt-orange version, but to my surprise I prefer my truly mixed pot with its contrasting cooler tones of lemon and apricot.

This pot is close to the patio doors and my seat at the kitchen table so I've had time to observe the subtle changes in colour from emerging bloom to mature flower, and also spot the scrawled veination across each petal. Their scent is wonderful too.

Until now I've preferred their perennial cousin Erysimum 'Bowles Mauve', which is also in bloom this month. If it stays true to form it'll remain so for the rest of the year. However, don't be surprised if I come home from our local market in the autumn with another mixed bunch of wallflowers. I'll be looking forward to further surprises next spring.

According to Val Bourne's article in 2013's Gardens Illustrated, the genus Erysimum is derived from the Latin erno, which means to draw up. Biennial wallflowers were previously of the genus Cheiranthus (now placed within Erysimum), which was derived from the Greek cheir, meaning hand and anthos, flower. This name is probably derived from the wallflower nosegays used to ward off the stench of Medieval streets.

Val's article is well worth a read as she tells a tragic tale in the History and Legend section as well as providing a number of recommendations of varieties worth growing.
Botany Garden Bloggers' Blooms Day Latin Without Tears plants