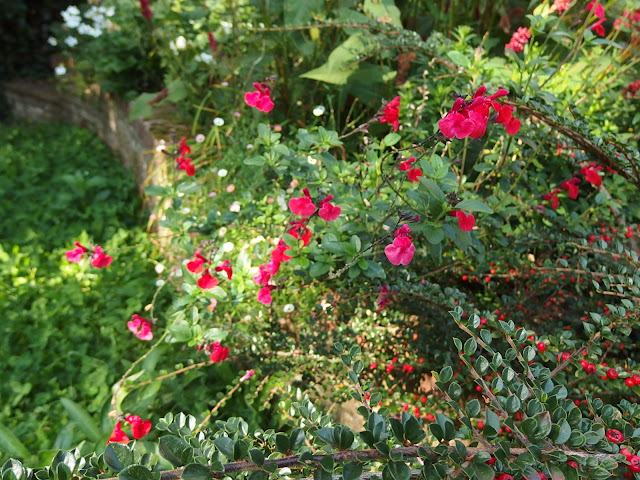 I confess it's third time lucky for my Salvia 'Royal Bumble' here at VP Gardens. Its predecessors have not survived the winter in two previous years and I thought this one had gone the same way. I was delighted to see some tiny signs of new growth when I cut it back in May and now it's beginning to take possession of its allotted spot. I'd be lying if I said its combination with its cotoneaster neighbour was by design, but now you come to mention it, I do like how the flowers of one and the berries of the other echo each other. 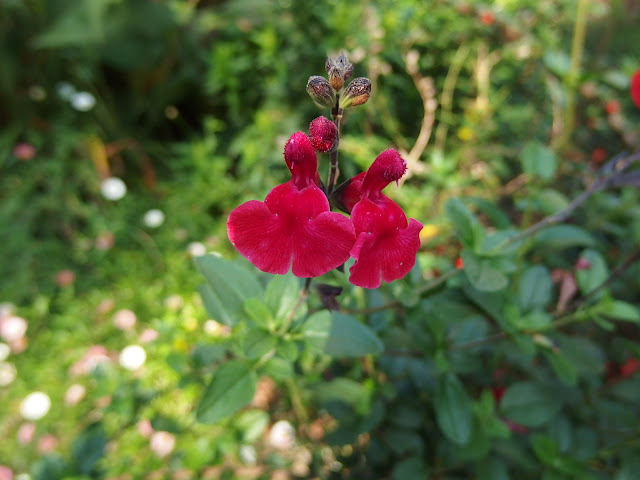 As you can see, the flowers are similar to those of Salvia 'Hot Lips' which I have in the terrace bed on the other side of the central steps. Unlike its cousin, the rich red flowers of 'Royal Bumble' stay a constant colour, and both are loved by bees (sadly not hummingbirds, we need to go across the pond for that). Both are listed as being semi hardy here in the UK and I'm pondering why 'Hot Lips' has survived many a winter here, yet 'Royal Bumble' hasn't. Their position could be key, because 'Hot Lips' is in full sun for most of the day whilst 'Royal Bumble' doesn't sit in sunshine until around an hour later. Both are protected by a garden wall, so fingers crossed both are here to stay, especially now the latter has put on some good growth over the summer. It's been in bloom since early July and I expect it to last until the first frosts at least, thus it provides good value for my garden.

This salvia grows to around 2 feet tall and wide and has yet to reach its full potential here at VP Gardens. I must cut back its cotoneaster companion to allow it to do so as it does shade it a little. I'll leave that until the spring as I think the cotoneaster might give it some shelter for the coming winter. In the meantime I'll give it a good protective mulch as soon as my recently made bagful has rotted down a little. I could also take some precautionary cuttings to overwinter in my coldframe... assuming I remember in time!

Which salvias do you grow in your garden? Any top tips for looking after them? There are some great suggestions in the comments.