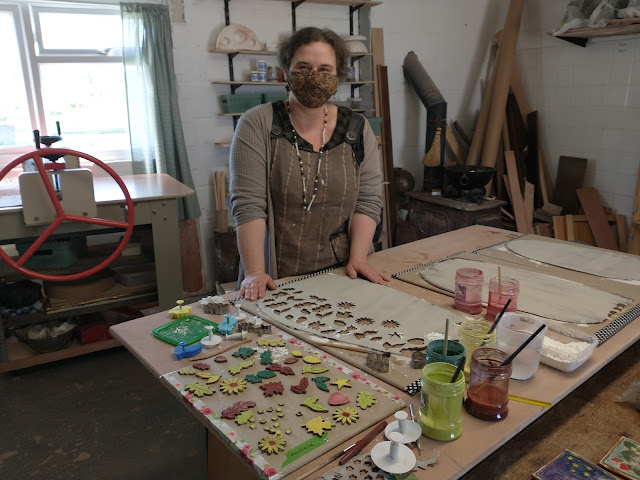 I had a marvellous hour with Eli on Saturday at her Wiltshire Ceramics Studio in Foxham where we had a play with rolled clay and cutting out shapes then adding coloured glaze ready for firing. Eli took on the studio the weekend just before Lockdown began (timing!) and she was only able to start offering taster sessions like the one on Saturday recently. As you can see we masked up for the occasion, everything was sparkling clean in the studio, and I was offered fresh clay to work with. She also supplies clean aprons, but I was pleased I'd taken my own as it'll save her some work afterwards. 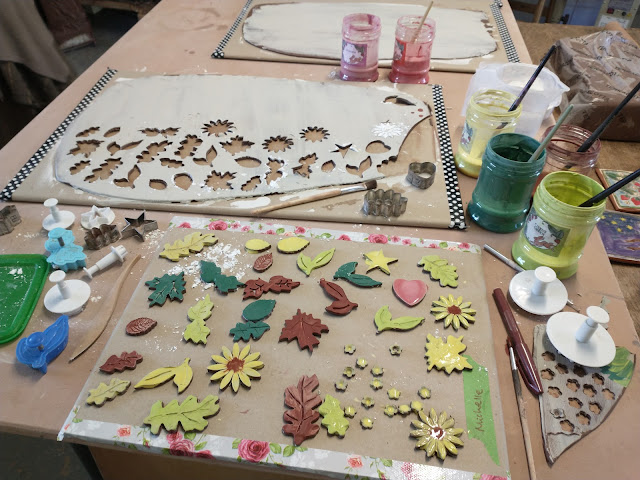 Eli hails from the States and her bubbly personality is full of enthusiasm for her craft. She encouraged me to try all aspects of the process, from cutting the clay to work with from the large block, bashing it down with a large rolling pin before using the the large roller to produce the final flattened piece of clay. I then transferred it to a board, gently smoothed it out with a scraper + water and then painted it with some preparatory slip. Then came the fun part: my selection of various cutters to produce the shapes ready for glazing.

Saturday's session was billed to make buttons using various leaf shapes, but if you look closely at the photo above, you can see I sneaked in some others. I also used a carving tool to add veins to the leaves if they weren't part of the cutter's design. Each cutter was dipped in a mix of cornflour and glass fritt before using - I found it was much harder to get the clay out from the cutter when I forgot this simple step! Then I had the fun task of choosing which glazes to add to my pieces. They needed some drying time after this, so Eli will add the button holes before she fires them in her kiln and I'll collect the finished pieces in a couple of weeks.

It was a lot of fun and a great way of lifting my mood after the recent gloomy news. I've decided to try and find regular sessions like these plus visits outdoors (and lots of walking!) to keep going over the coming months. A large box of craft supplies arrived last week - including some new-to-me crafts to try - to help tide me over the winter when the weather's too miserable to go out.

What are your plans to get through the coming months?