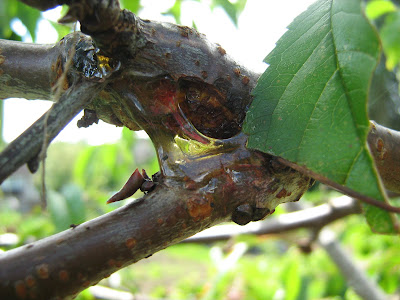 When I wrote about Gardeners' Question Time recently, I also mentioned I needed to confirm with an expert whether one of my fruit trees is suffering from bacterial canker. It's now been confirmed that it is :(

The above picture shows the amber coloured oozing I found on my cherry tree recently. I was hoping it was gummosis, which can happen on healthy wood after the kind of hard winter we had earlier in the year*. 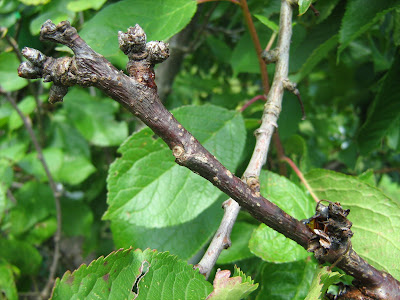 However this second picture shows other symptoms which helped to confirm it's bacterial canker: the lack of leaves on branches affected by the disease, plus the wrinkling and sunken nature of some of the bark (sometimes cracked elsewhere). I've yet to find an example of the numerous holes in leaves (aka shothole) to show you which can also develop on affected trees. I wonder if the brown spots seen on the leaf at the bottom of the picture are an early sign of this developing?
The advice usually given is to prune out all infected branches** back to healthy wood and to burn them. However, I was concerned that doing this now might compromise the whole tree because the wounds wouldn't have time to heal before the onset of winter. This in turn would leave the tree vulnerable to further attack by more canker or other dread diseases.
It turns out I'm wise to stay my hand (+ secateurs/pruning saw) because I should have done this by the end of August at the latest and applied a protective paint to the wound. I'm now going to have to wait until next May, so that I don't put the tree at risk of developing silver leaf disease. Once the task is completed, my tools will need thoroughly disinfecting before I let them loose on any other of my fruit trees.
So it looks like I'll have a reduced cherry crop next year, but if I do the job properly there'll be much more in the years to come. I won't be taking the advice to spray my trees with Bordeaux mixture in August, September and October next year as I don't really like using this chemical where food is concerned even though it would be well after cropping time. However, if the disease returns I might change my mind...
* = NB most of the online references I've found use gummosis (such as this one here) as the general term for substances oozing from tree bark, irrespective of whether the cause is a physiological one or a disease. However, my copies of The Fruit Expert and Grow Your Own Fruit use the term to refer to substances oozing from healthy wood caused by adverse weather conditions.
** = thank goodness it's not on the main stem, otherwise I'd have to dig up and burn the entire tree to prevent the disease spreading to my gage, damson and plum in the same row.
Fruit n Veg pests n diseases