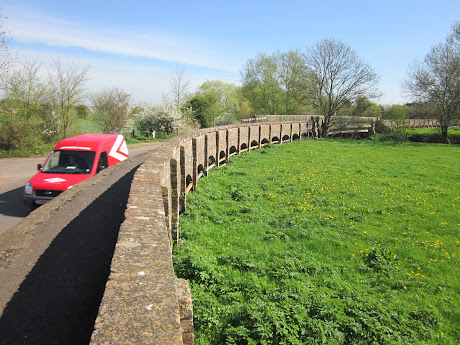 I've stepped out of Chippenham today to take you to nearby Kellaways to show you the most dramatic feature of Maud Heath's Causeway as it crosses over the River Avon. The causeway links Wick Hill to Chippenham and was a philanthropic gesture made by Maud Heath in 1474.
The story goes that she was rather fed up of getti﻿ng her feet wet when travelling to Chippenham Market to sell her eggs. She bequeathed funds upon her death to build and maintain a footpath from her home into town just over three miles away so that future travellers to market might arrive dry shod. 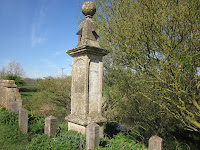 As you can see the raised pathway is much longer than the width of the river at this point, but takes winter flooding into account. The trees in the centre of the main picture are screening a monument erected in Maud Heath's honour in 1698.  It has a sundial on each side and Chippenham Clift and Wick Hill are inscribed on the 2 sides facing each destination. The side to the right of the picture is the Wick Hill direction.

The main inscription on the front side (to the left in the picture) reads:

In the year of grace 1474, for the good of travellers did bestow in land and houses the sum of eight pounds a year foreer to be laid out on a causeway leading from Wick Hill to Chippenham Clift.
And beneath this a further inscription reads:

The bequest still maintains the path to this day and it can be followed into Chippenham to the top of New Road, where I took the picture of St Paul's church for the letter C. From Kellaways to Langley Burrell, the tarmac sometimes gives way to cobblestones, showing how the path must have looked when it was first laid.

If you'd like to walk the length of the Causeway, I've found this website with full details :)

The Causeway is also a listed building which I photographed for English Heritage's Images of England Millennium project.