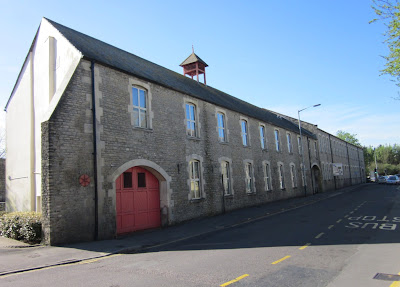 Nestlé is no more in Chippenham, but here's its old factory by the side of the River Avon in the centre of town. It's called Avonbridge House these days and was converted into offices in 1985﻿. If you ever ate condensed milk before 1962 here in the UK (and elsewhere in the world if you bought the Milkmaid or Carnation brand), then it would have been made and canned in this very building. It was the oldest milk condensery in the world and the building dates back to 1873.

Chippenham is often thought of as an old woollen, market or railway town, but until recently it was also a major player in food production. Besides providing the condensed milk for our Saturday night teatime treats, Oxo cubes also hailed from Chippenham until 1975 and if you remember all the furore over whether ham imported from Parma and sliced in this country could be called Parma ham, well it was the former Hygrade factory just over the road which was at the centre of that particular storm.

Putting Parma ham to one side, North Wiltshire is also famous for its bacon and ham products and dry cure Wiltshire Ham is one of the few named cures available at most supermarkets and delicatessens. Harris's of Calne is the name most associated with this product, but Chippenham had the rival The Royal Wiltshire Bacon Company Ltd, at one time the largest of its kind in England. Its factory used to be alongside the railway station where the Hathaway Retail Park is today. I can remember waiting for my regular commuter train to Bristol in the mid 1980s watching the enormous building being demolished after it finally closed.