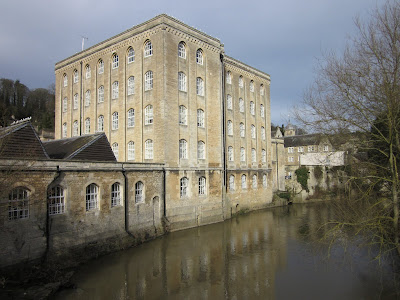 I'm rather chuffed to have my first article in this month's Wiltshire magazine. It's all about Bradford on Avon's river and canal heritage and is called Wool, Tennis Balls and Boats. It all came about in response to a tweet from the editor last December and a fun trip on the Kennet and Avon canal with her plus some of the magazine's other writers in early February.
It's been a fantastic opportunity to write for the magazine and I'll be following up in future months with articles on Wiltshire's villages. This piece was a lot of fun to research and write and is just the kind of thing I'd have on Veg Plotting, though this time I've had to step out from behind VP and write as the real me. It is quite different writing to someone else's brief - no matter how closely it matches your own - and to keep to a word limit though!
The picture is of Abbey Mill, one of the photos which didn't make it into the magazine. The mill was used at first for producing woollen cloth, which was then converted to producing rubber items for the railway industry in the late 1800s when the cloth industry started to decline. It's now been converted into retirement flats after the mill finally closed in the 1990s.
You can read the full article here. You take the link on the left hand side for the online edition and then go to page 48 for a full 3 pages complete with photos :)
Goals time out Wiltshire