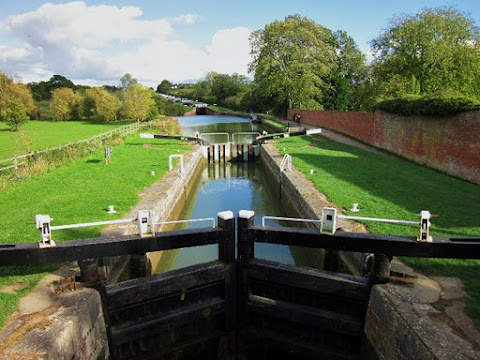 On Friday NAH and I took one our favourite walks at Caen Hill flight in Devizes. I never tire of this view towards the town. 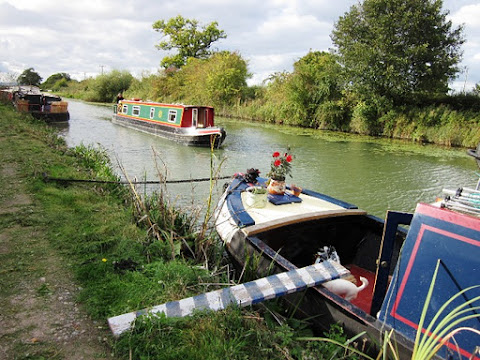 For once we didn't walk up the hill, but instead we ducked through the bridge under the main road and strolled towards Lower Foxhangers. Here I was surprised to find a few liveaboard boats as well as the holiday narrow boat passing by. It seems permanent canal life is spreading. A few years ago it was seen just around Bath, but now several other communities have sprung up, such as the one here in Devizes and also Bradford-on-Avon.

We'd decided to walk this way as we'd read in the Gazette and Herald about a new 248 berth marina about to open at Lower Foxhangers. It's a significant change to this part of the canal, but in reality too well tucked in to show you a decent photo. Perhaps I'll take one after it opens in a week or so's time, when we'll be able to get a bit closer.

Nearby, a boat hire company was busy with people arriving. NAH and I speculated just how far they might be going if they were weekend rather than weekly hirers. The Caen Hill flight has 29 locks in total, so at 4 locks per hour - a general rule of thumb for canal holidays - we worked out they'd only travel around 3-4 miles. That's probably why most of the people we saw were going away from the main part of the flight: by travelling towards Seend there's just 5 locks to tackle. 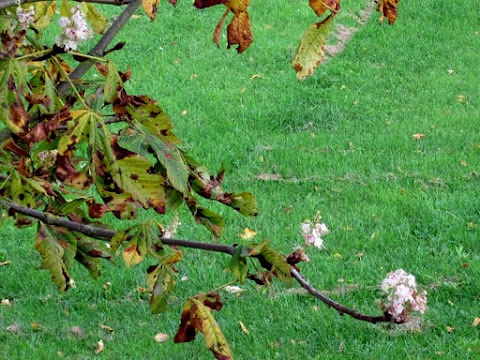 On our way back I spotted some horse chestnut trees close to where I took the top photo. As well as displaying their usual autumnal colouring, there were distinct patches of leaf miner moth damage and blossom! This is the first example I've seen of the spring flowering many gardeners are currently talking about. It illustrates perfectly how this year's unusual weather has tricked mother nature into thinking it's spring again.

Where did you get to over the weekend? Did you find anything new or unusual?
NAH pests n diseases plants time out Weather Wiltshire