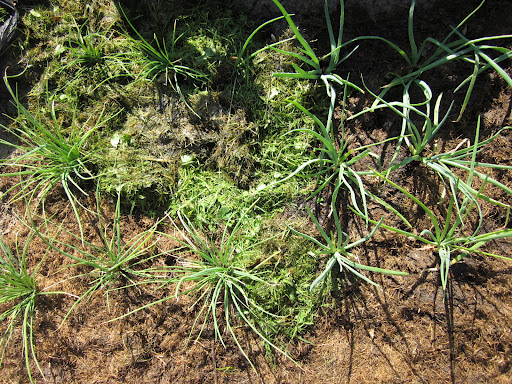 It's still early days as far as my echalote grise allotment experiment is concerned, but already there's a noticeable difference between my shop bought and seed varieties.

The ones on the left of the photo are the sets I bought. Their growth is much more spidery in appearance and it looks like they're shaping up to give me lots of new shallots. To the right are the shop bought ones and their growth is much more onion-like. I suspect I'll be getting fewer shallots per bulb. Whether they're also much larger remains to be seen.

The picture shows another allotment experiment I'm trying this year. Despite the plentiful rain we had last month and for most of this one, the recent dry weather has taken the allotment back into really parched mode. So I'm trying out mulching around my crops with grass clippings to retain as much moisture as I can.

I saw this being used a lot at Glendale, a fantastic garden I visited on Vancouver Island last year and as they also train up Master Gardeners there, it looked not only a good thing to try, it's also a good way of making use of all my grass clippings. It's easy to push them back when I want to water everything and should also help to keep the weeds at bay. Fingers crossed they don't became a haven for slugs though!
Allotment Fruit n Veg Techniques Testing