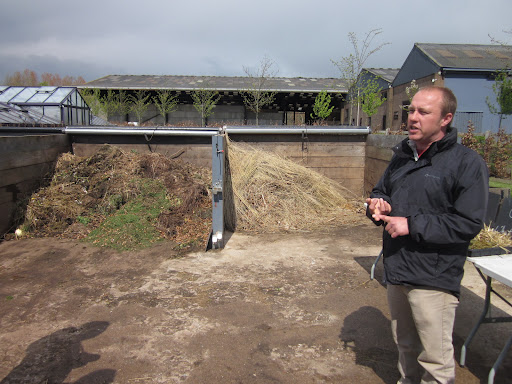 It's International Compost Week (6-12 May), so it's a good time to tell you about the talk I attended at The Organic Garden at Holt Farm recently. James (the Head Gardener) is famous for his enthusiasm for the stuff and has made the compost area the heart of the garden.

The above picture shows 2 of the large bays where the compost is made. As you can see they compost on a concrete base at Holt Farm which goes against the usual advice. They've not found it makes any difference to their compost making and the worms don't seem to have a problem in finding their way into the heaps to help turn the raw materials into the finished product.

Being a certified organic garden, compost is the main soil amendment used by the team, so they make as much of the stuff as they possibly can. Like all gardens there's never enough though, so perhaps it's just as well the garden is on rich clay soil. As the garden is 6 and half acres and next door to the farm, a large heap of the correct ratio of green and brown material can be constructed in no time. This means they have hot heaps, which are also turned regularly so the compost is ready in a matter of weeks rather than the year my cold, unturned heaps take. 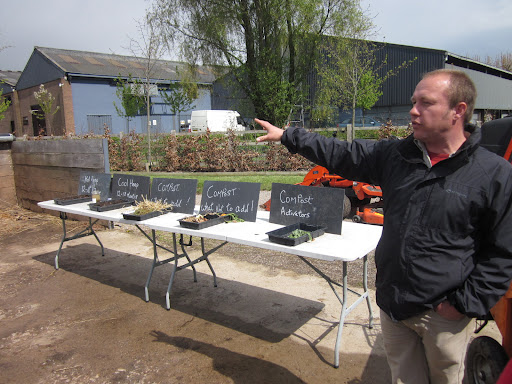 Here James is taking us through cold versus hot heaps, what to add, what not to add and the compost activators they use. If you want further information on this, then the Garden Organic website provides a comprehensive guide. 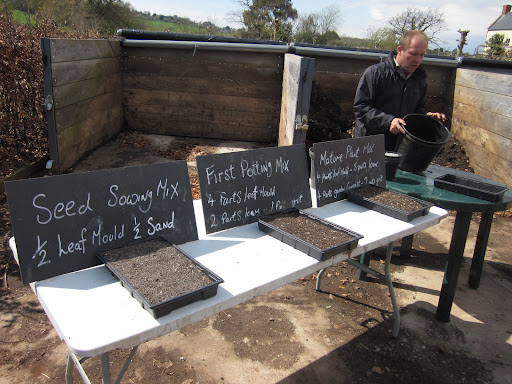 We were also shown the mixes used at various stages of propagation and potting. Any leaf mould, loam or compost used will be sieved prior to use. The loam is made primarily from turf stacks when turf has been removed from various parts of the garden. This is something I'm aiming to make up at the allotment this year to add to my leaf mould and compost resources. The details of the centre and right mixes shown are as follows:
They do find they get weeds germinating in their mixes (as would be expected), so some vigilance is needed!

They also make nettle (though unlike the link they suspend theirs in a bag in a water butt to make life a bit easier) and comfrey foliar feeds (just packed tightly on top of some chicken wire at the bottom of another butt and then weighted down for the feed to eventually trickle out) which are then diluted and used mainly as a tonic on garden pots and in the greenhouse.

We also learned how to make compost tea for a few pounds instead of using an expensive shop bought kit which My Tiny Plot has summarised very nicely :)
Garden Visit Greener Living Talks Techniques