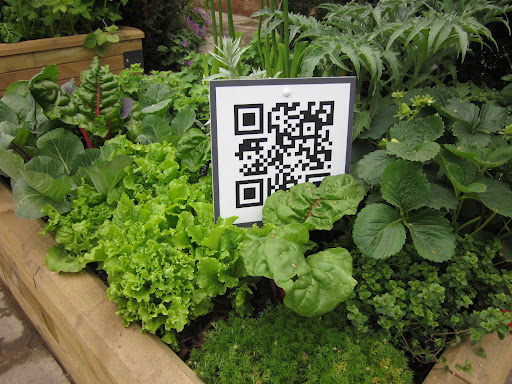 My final post about this year's Chelsea Flower Show - and suitably for this month's Salad Days - is to bring you this picture of salad looking at its very best - if you ignore the QR code!

There was quite a bit of salad on view, if you looked carefully enough. Sadly the living wall of nasturtiums didn't make it onto Tom Hoblyn's garden for Arthritis Research UK. I'd been looking forward to telling you about seeing them just after their germination last November and how Jekka McVicar had had to chop them back and eat them several times so they'd be just right for the show! However, having seen the garden on Monday, I can see how they wouldn't have fitted in with the rest of the planting. 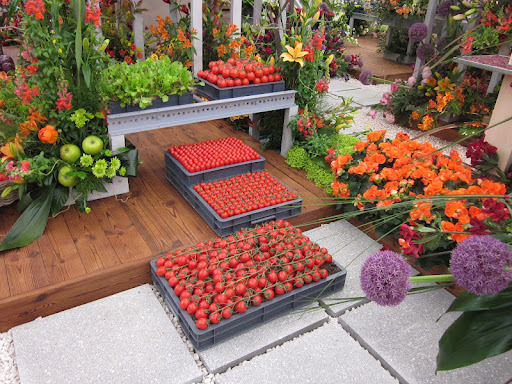 So I had to hunt around a little for an alternative salad fix. The Crocus Kitchen Garden Blog has featured most of the prime spots from the Great Pavilion already so I'm not proposing to repeat them here, even though I was blown away by Jersey Farmer Union's 'stained glass windows' made up of various coloured peppers. As it's National Tomato Week, here's a picture from the NFU exhibit instead. 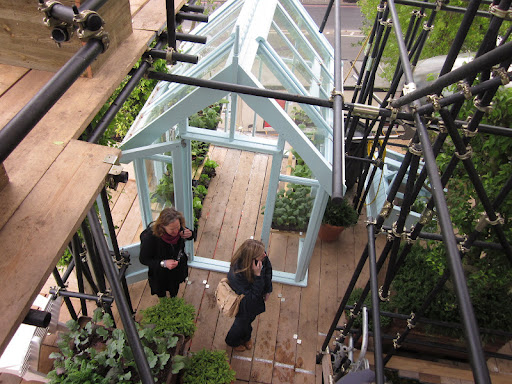 Show garden wise Diarmuid Gavin's tower had an entire floor dedicated to Grow Your Own with a greenhouse and coldframe to covet. The charming dog kennel on Jo Thompson's Celebration of Caravanning show garden had a wonderful edible roof, including lots of herbs and tempting strawberries. 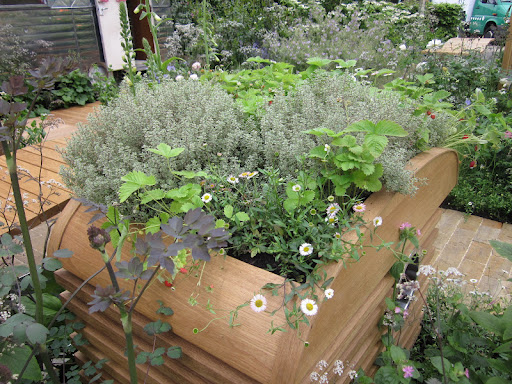 The most surprising find was the salad in the top picture and is from an example of planting which usually doesn't get a look in as far as most of the Chelsea coverage is concerned. A lot of the larger sundries stands have some kind of planting to augment the products they're trying to sell. Often these are put together by designers without a show garden at Chelsea that year, or by one of the nurseries exhibiting in the Great Pavilion, so a closer look can be very worthwhile. The pictured salad was grown by the charity Thrive especially for the show and I'm sure must have helped Alitex achieve their commendation from the RHS for their stand.

How are you getting on with your salad this month? Anything you'd like to exhibit? Do a show and tell on your blog and provide a link to your post via Mr Linky below.
52 Week Salad Challenge RHS Salad Days Showtime