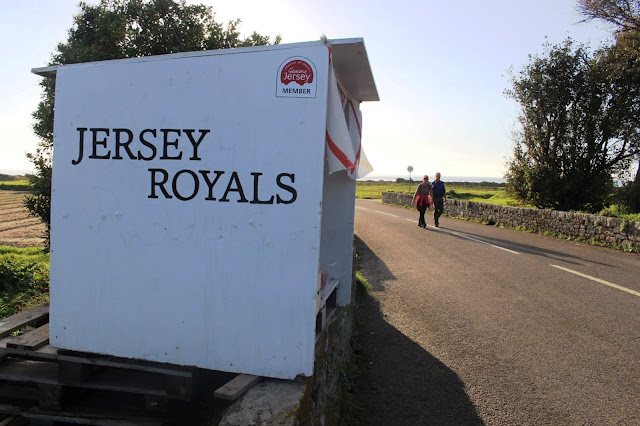 One of my favourite sights on Jersey were these vegetable stalls at the side of the road. We found four of them, and this one was the first we discovered (at L'Etacq at dusk) and is also my favourite. It's the only one perched atop a wall (the rest relied solely on pallets) and I love how you can see the fields behind where the produce is grown, plus the clear light and the thin blue line which shows how close we are to the sea. 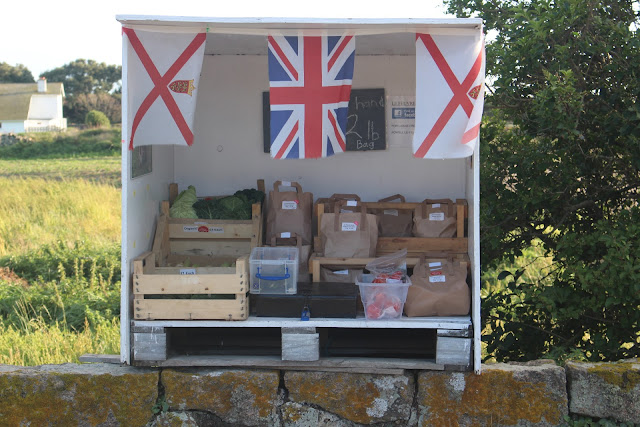 Now you can see how the system works. The produce is refreshed at least once a day and relies on an honesty box for payment. The island is famed for its potatoes and the Jersey Royal now has Protected Designation of Origin (PDO) status, which means only potatoes grown and harvested on the island can be named as such*. There were a few bags of them for sale, alongside cabbage, kale, spinach, sweetcorn, courgettes, green beans and tomatoes. All are grown organically. 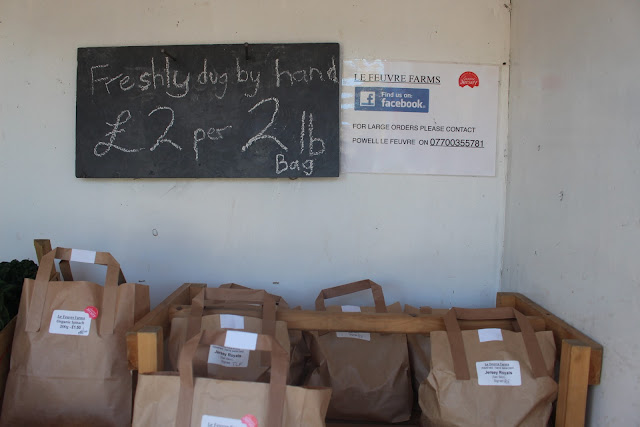 The stalls belong to Le Feuvre Farms, a family concern that's been farming on Jersey for over 5 generations. I love the contrast of the sign saying the produce is dug by hand (a Jersey tradition) and the fact they have a Facebook page to promote themselves. Their page is well worth a look as it gives a wonderful insight into farming life on the island. 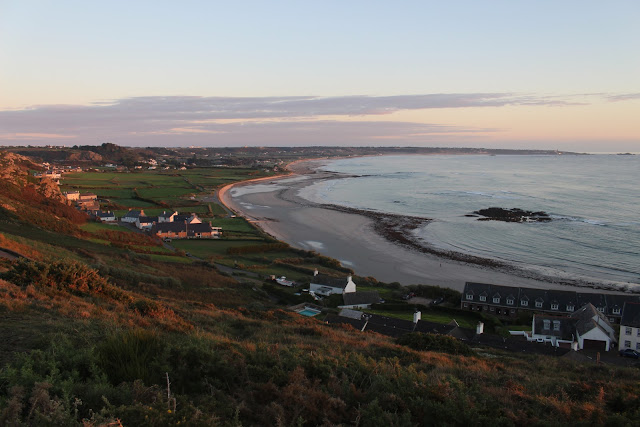 Here's a slightly different view to the one I showed in my recent postcard. You can see the L'Etacq area and how small the fields are on Jersey. Many farmers still collect seaweed to fertilise their fields and there was plenty along the bay's seashore. There was a wonderful old photograph in our cottage of horses with huge baskets being loaded up with seaweed ready for transfer to the fields.

Later in the week I saw a tractor pulling a trailer loaded with pallets and many potatoes delicately balanced on them. I was reminded of eggs in their boxes and it showed just how precious the cargo was to the farmer concerned. Apart from the Channel Islands, mainland Britain is the only other place where Jersey Royals can be purchased and we hoover up around 99% of the crop. It forms about half of the island's agricultural income.

I also saw some campaign banners saying 'Keep Jersey Farming' during our stay. It seems farming is under threat on the island, just like it is here in the UK. Around half of Jersey's land is in horticultural or agricultural use, so if there's a decline it will have a major impact on the island's look and feel.

It would be a shame if farming continued to decline and there were no more exhibits at RHS Chelsea, or roadside vegetable stalls, or Jersey Royals for tea.

* = which is why everyone else has to make do with the less romantic sounding International Kidney.
Food n Drink Fruit n Veg Regionality time out