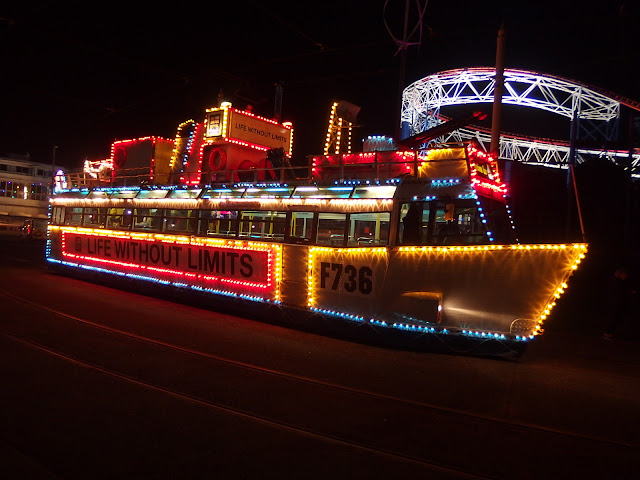 Sunday's Apple Day post delayed my customary postcard on return from holiday, but I think it's worth the wait. We've concentrated mainly on the eastern side 'oop north on previous cottage holidays, and the western side - namely Lancashire - proved just as rewarding last week.

Storm Callum didn't prevent us from having a great time at Moseley Old Hall in Staffordshire on the way up (and down - I think I've become addicted to the National Trust's cheese scones as a result), then we found ourselves staying at a mere 5 metres above sea level in the 'lettuce capital of England' (my words) where we were surrounded by hundreds of acres of lettuces, cabbages, glasshouses, and other market gardening activities.

Elsewhere in the village, the West Lancashire Light Railway was the friendliest heritage railway we've ever visited, and I've fallen in love again with Booths, the northern based supermarket.

We had time to see family and friends; and plenty of warmth for cups of tea and meals sat outside in the sunshine every day (in October!), though not enough time to see if we could find Blackburn's 4,000 holes.

As you can see, we became part of Blackpool's famous illuminations when our heritage tram turned out to be a boat; listening to thousands of geese arriving for the night at the Wildfowl and Wetland Trust's Martin Mere reserve was magical; Gawthorpe Hall has a treasure trove of textiles and needlework to admire, and Anthony Gormley's 'Another Place' at Crosby was worth the trip alone.

Canalside walks in Tarleton and Rufford Old Hall; seaside wandering at St Annes, Southport and Fleetwood; the bonkers brilliance of the World Timbersports championships in Liverpool; and a waterfront walk completed the most satisfying of weeks.

More on some of these places to come...
National Trust Postcards time out