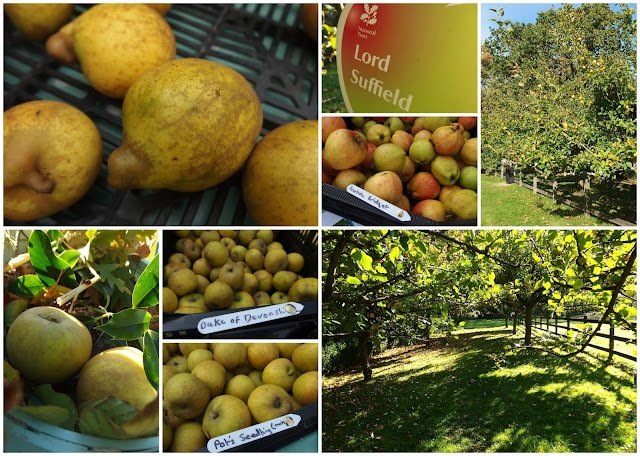 We've been in Lancashire for a few days where I had the opportunity to discover some apple varieties which suit more northern climes. I'm delighted I wasn't that familiar with most of these and there's just enough time left to write this post for today's Apple Day celebrations.

The larger picture shows 'Lemon Pippin' with its unusual yet giveaway shape. Its site description says (which differs in some details with the one given in the link): An old apple of the 18th or 19th Century, origin either Norman or English. A dessert/cooker with a crisp flesh and slightly tangy in taste. Pick October to December.

The other unnamed apples shown are 'Duke of Devonshire' which resided in the basket of one of the scarecrow trail's figures. Judging by the crop in the orchard and on sale in the courtyard, this looks to be a prolific russet variety.

Here are the links to descriptions of the named varieties in the photographs: