GBBD - New Flowers on the Block 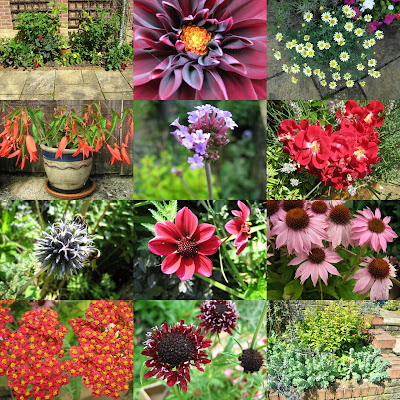 This post's a bit hasty today as we're off to a wedding in the Cotswolds, so bridal bouquets are more on my mind than all that's blooming in the garden. A quick run round this morning found me concentrating on just this year's new additions which are now strutting their stuff. From top left circulating clockwise (click on the image to enlarge it if needed) we have:

A year ago today, I opened my garden online as a standalone blog to raise money for WaterAid's Sing for Water. A magnificent total of £1085 was raised - around 1750 USD. Many thanks to all of you who visited, commented and donated, it was a fantastic response. As no further money has materialised since January, I've now closed the garden to donations. However, I won't be closing my Open Garden blog as it gives such a good introduction for new Veg Plotting readers. It'll also give you a good idea of how the garden as a whole is doing at the moment. I'll be updating the link from the sidebar on here as well as the blog itself to reflect its new status shortly.