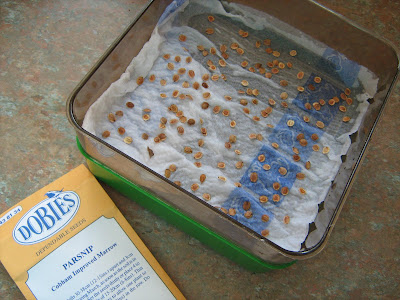 Threadspider and I are sharing our seed order again and met up for coffee recently to divide the spoils. Our allotment society is using Dobies as the discount supplier of choice this year, though we did find ourselves putting in a sly side order with the previous supplier DT Brown in order to have all the varieties we want to grow.

We're trying a new parsnip variety (to us anyway): elegant Cobham Improved Marrow which tapers neatly, is resistant to canker and reputed to not grow too big. In our clay soil the massive champion style varieties would only twist and fork themselves into something resembling a sea monster and so would be hell to prepare for cooking.

That clay soil and parsnip seed's notoriety for being more than a bit reluctant to germinate means I chit them in addition to my seed potatoes. For parsnips this means keeping them spread out on some damp kitchen towel in my seed sprouter. As soon as their tiny roots appear (and before they drill those roots through the paper towel) I transfer them to loo roll (aka TP) tubes filled with some nice fine compost. Parsnips are also notorious for not liking any root disturbance (so its usually recommended they're sown in their permanent position rather than being transplanted later) and I've found the extra length of the loo roll tube gets over this problem. If you're feeling really flush, you could invest in some Rootrainers instead. For more on growing parsnips you might like to read the guide I wrote last year. 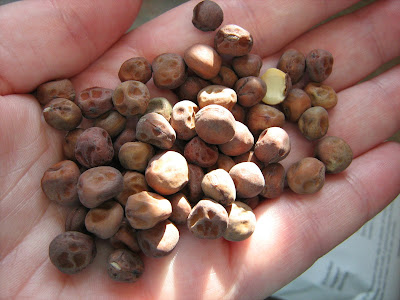 We're also trying a new mangetout pea this year, Carouby De Maussane. It was the purple flowers which persuaded us to buy them and we both got incredibly excited when I opened the packet to reveal these brownish red seeds. We wondered if it meant purple podded peas as well as flowers, but sadly Rebsie's guide shows they won't be. I'll keep you posted on what we think of the flavour.
Allotment Fruit n Veg Incredible Edibles Techniques