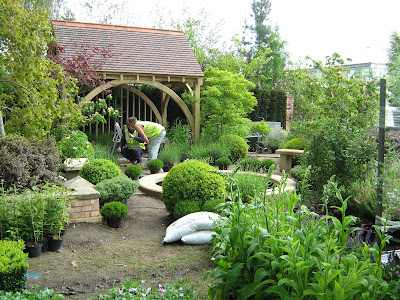 Spotting the Chelsea trends is one of the favourite sports of gardening journalist and TV coverage alike, so I'm rather pleased to be ahead of the game this year and reveal some of those I spotted on Monday. Actually, one of the trends this year show garden-wise is their diversity: there's jaw dropping construction, retro through to modern gardens, ones which are practical or making a statement (either as a garden in its own right or as an awareness raising vehicle), traditional or controversial. Putting all of that to one side - here's my pick of the Chelsea pops... 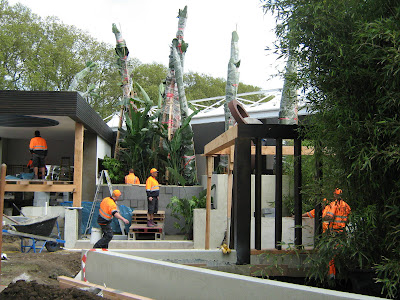 Lush green planting, with a few colour accents. I could have probably predicted this one before I was there owing to our harsh winter last year, but green is most definitely there in spades. That doesn't mean boring though - there's an immense variety: the architectural tropical vegetation of Flemings' (above - who also seem to be digging their way back to Australia), Thomas Hoblyn's and James Wong's gardens for instance. 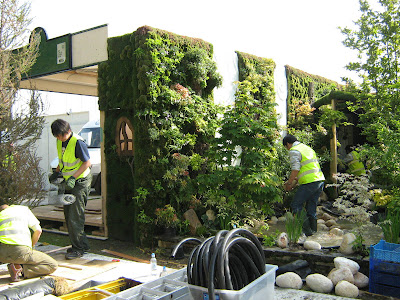 Then there's the hobbit-like moss walls of the Kazahana garden; or the precise geometric cubes vs cloud pruned box presented by Robert Myers and Tom-Stuart Smith respectively. Ferns and grasses are in abundance too. On the other hand, Roger Platt's (see top picture) and the Eden Project gardens promise to be a riot of colour and perhaps if everyone's inky irises open in time (they were very tightly budded on Monday), everyone will be talking about the colour purple this year... 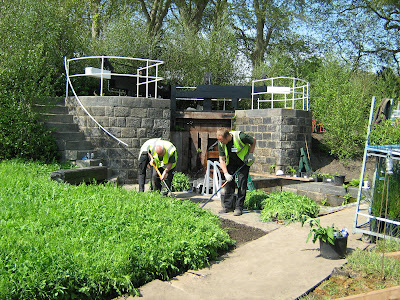 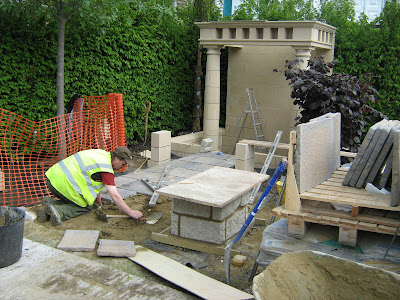 Biodiversity: this is a major theme for a number of exhibits in the Great Pavilion and the RHS will also be displaying their commitment to the UN's International Year of Biodiversity in there. Outside we have Paul Hervey-Brookes' Bradstone Biodiversity garden (above), plus one for bees and a courtyard garden depicting the importance of the rainforest in the Cameroon. 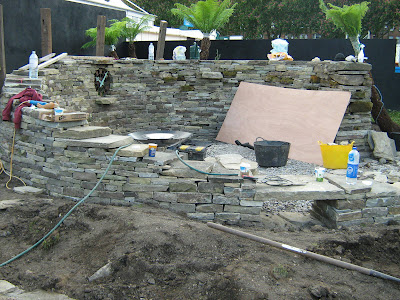 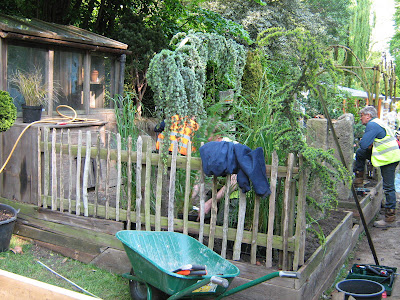 Conifers are back big time - you'd expect to see them in the Norwegian show garden and the above Courtyard garden which celebrates them, but they've snook in all over the place. On the other hand if deciduous is your thing, then multi-stemmed and/or peeling bark are very much in evidence as are various kinds of birch, multi-stemmed or not. 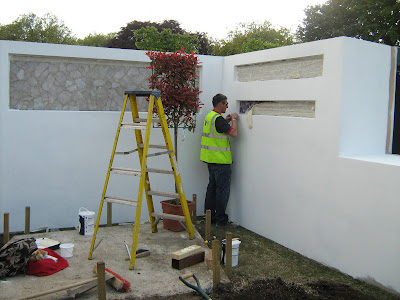 Controversy - there's no plasticine this year, but how about using artificial grass, or including a rather nifty greenhouse made out of plastic bottles or plastering your garden with [reportedly] 20 million pounds worth of diamonds? Sadly they hadn't started that phase of the build when I took the above picture. I'm wondering how close we'll be allowed to get come showtime.
Whatever the trends are outside, I'm sure inside the Great Pavilion there'll be a riot of colour. And finally, I can't resist showing you Andy Sturgeon's garden, because I love the contrast between the rusted columns, the square drystone walls and the wonderfully large curved bowl (and note the conifers). 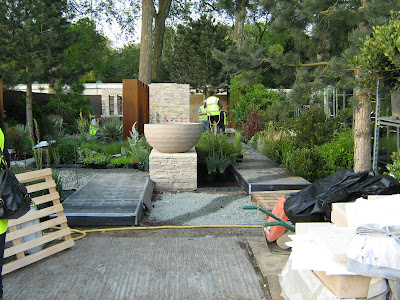 Tomorrow, I'll tell you a bit more about this year's Eden Project garden and the amazing coincidence I encountered there. In the meantime, you might like to have a look at some additional pictures I've uploaded to the BBC Chelsea website...
Showtime